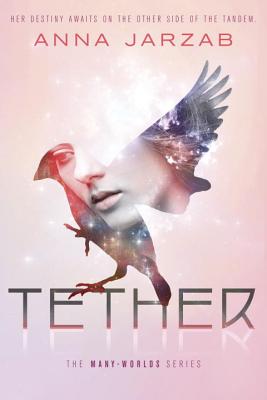 Tether, the sequel to Tandem, continues the captivating tale of rebellion and romance that spans parallel worlds.

Sasha expected things to go back to normal once she got back on Earth. But now that she knows parallel worlds are real, and that an alternate version of herself exists in a world called Aurora, her old life no longer seems to make sense . . . and her heart breaks daily for Thomas, the boy she left behind. Troubled by mysterious, often terrifying visions and the echoes of a self she was just beginning to discover, Sasha makes the difficult decision to journey once more through the tandem.

Thomas is waiting for her on the other side, and so is strange, otherworldly Selene, Sasha’s analog from a third universe. Sasha, Selene, and their other analog, Juliana, have a joint destiny, and a new remarkable power, one that could mean salvation for Selene’s dying planet. With Thomas’s help, Sasha and Selene search for the missing Juliana. But even if they can locate her, is Sasha willing to turn her back on love to pursue a fate she’s not sure she believes in?

“Good for fans of fantasy and intricate other-world construction."—VOYA

ANNA JARZAB is the author of All Unquiet Things, The Opposite of Hallelujah, and Tandem. She lives in New York City and works in children’s book publishing. Visit her online at annajarzab.com and follow her on Twitter.
Loading...
or
Not Currently Available for Direct Purchase