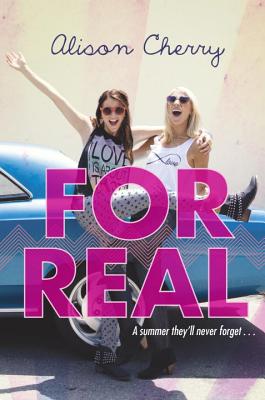 From Alison Cherry, author of Look Both Ways and Red, comes a terrific story that's "too fun to miss" (USA Today) about two sisters and one big question: how do you know who's for real? When Miranda discovers her boyfriend, Samir, cheating on her just after her college graduation, her sister, Claire, comes up with the perfect plan. They'll outshine Miranda's ex on Around the World, a reality TV show on which fame-obsessed Samir is already scheduled to compete. Claire expects the game to be simple: all they need to do is race around the world faster than Samir and they'll win a million bucks. But the show has a twist, and Claire is stunned to find herself in the middle of a reality-show romance that may be just for the cameras. In a world where drama is currency and manipulation is standard, this summer could end up being the highlight of her life . . . or an epic fail forever captured on film.
"Fresh, fun, and packed with adventure." --VOYA "A sweet and funny story of sisters bonding." --Publishers Weekly "A comic romp with considerable wisdom on the side." --Kirkus Reviews "Funny and lighthearted, this novel nevertheless delivers truth in tender ways." --Booklist

Alison Cherry, author of Red, For Real, Look Both Ways, and The Classy Crooks Club, grew up in a suburb of Chicago and graduated from Harvard. She is a professional photographer and worked as a lighting designer for theater, dance, and opera productions for many years. During that time, she spent six months in the magical, exhausting world of summer stock theater, where everyone works 120 hours a week and survives on a mysterious elixir of caffeine, sugar, and adrenaline. Eleven years later, she's still trying to catch up on sleep. She lives in Brooklyn, New York. alisoncherrybooks.com Follow @alison_cherry on Twitter and @alison_cherry on Instagram
or
Not Currently Available for Direct Purchase
Copyright © 2020 American Booksellers Association