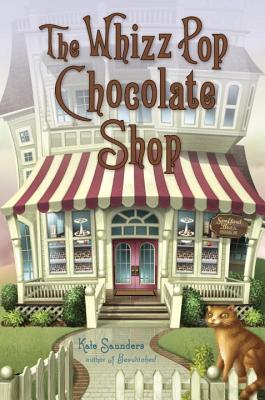 “Oz and Lily's family move into the house left to them by their great uncle, a magical chocolatier. When they are recruited -- without their parents' knowledge -- to stop an evil mastermind from using the chocolate for destruction, they learn that they too have magical powers. Will they be able to use their powers to save the day? Will the invisible ghost elephant named Edwin play a role? A charming adventure for middle-grade readers!”
— Hannah Johnson-Breimeier, Boswell Book Company, Milwaukee, WI
View the List

"Reminiscent of Road Dahl's Charlie and the Chocolate Factory . . . a great read-aloud." --Booklist

Welcome to the most magical house in London.

The family of eleven-year-old twins Oz and Lily have inherited it, together with the mysterious shop downstairs. Long ago, the shop's famous chocolate-makers, who also happen to be Oz and Lily's great uncles, were clever sorcerers. Now evil villians are hunting for the secret of their greatest recipe. The terrifying powers of this magic chocolate have the ability to destroy the world.

Soon, Oz and Lily are swept into a thrilling battle, helped by an invisible cat, a talking rat, and the ghost of an elephant. It's up to them to stop the villians and keep the magical chocolate recipe out of harm's way. Their family and the world depends on it.

Kate Saunders has written lots of books for adults and children. These include Beswitched, Magicalamity, The Whizz Pop Chocolate Shop, The Curse of the Chocolate Phoenix, and Five Children on the Western Front. She lives in London.

“This story has adventure, excitement, humor and magic, and will appeal to boys and girls alike.”—SLJ

“Reminiscent of Roald Dahl’s Charlie and the Chocolate Factory.”—Booklist

“A quick pace and intricate plot twists keep excitement high . . . [in] this enjoyable and moving romp through a magical London underworld.”—Publishers Weekly

Five Children on the Western Front

Winner of the Costas Award for Children’s Fiction

“Saunders strikes a surprisingly successful balance between the mischievous magic of the sand fairy and the harsh realities of wartime England.” —The Bulletin

The Curse of the Chocolate Phoenix

“Saunders weaves the supernatural with the ordinary with ease. Readers who enjoyed The Whizz Pop Chocolate Shop will not be disappointed.”—Booklist

“Clearly, Saunders has honed her deft and breezy comic style while affectionately channeling mild echoes of Harry Potter and The Hobbit.”—Kirkus Reviews

“Saunders’s imagination is out in full force. Hand this to readers who love adventure, fantasy, and Mission Impossible–type adventure.”—SLJ

★ “[Children] will love this action-packed adventure, brimming with sly humor and clever asides….This book should fly off the shelves, with or without a magic carpet.”—SLJ, Starred Review

“Saunders weaves a tight tale with a satisfying conclusion.” —Booklist

★ “This absorbing novel…features a dimensional, delightful protagonist, whose personality and growth ring true....Along with the entertaining magical elements, the universal themes of self-discovery, and looking beyond appearances combine into a wholly engaging and enjoyable read.”—Booklist, Starred Review

“Saunders offers a coming-of-age tale against the rich backdrop of full period detail . . . [It] will charm readers.”—Publishers Weekly

“A ripping English boarding-school story with a perceptive heroine and time-travel twist guaranteed to appeal to modern schoolgirls.”—Kirkus Reviews
or
Not Currently Available for Direct Purchase
Copyright © 2020 American Booksellers Association