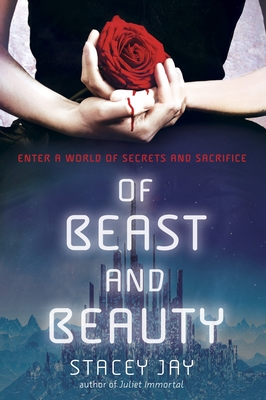 Of Beast and Beauty (Paperback)

What if Beauty became the Beast? Discover a new angle on the classic fairytale in this fantasy retelling that's perfect for anyone who can't get enough of Beauty and the Beast.

In the city of Yuan, the blind Princess Isra is raised to be a human sacrifice. Her death will ensure her city’s vitality.

In the desert, a mutant beast named Gem fights to save his people, known as the Monstrous, from starvation.

Neither dreams that, together, they can return balance to their worlds.

When Gem is captured for trying to steal Yuan’s enchanted roses, he becomes a prisoner of the city. Isra enlists his help, and soon begins to care for him—and to question everything she has been brought up to believe. . . .

“The bones of the classic Beauty and the Beast story are all here, imaginatively fleshed out with tropes from science fiction, fantasy, and even political drama.” —The Bulletin, Recommended

“Jay’s characters are well-realized . . . [the] setup is intriguing and her writing assured.” —Publishers Weekly

STACEY JAY is the author of the popular Juliet Immortal and Romeo Redeemed and several other books for young adults. She lives in California with her family.

Praise For Of Beast and Beauty…

Justine, August/September 2013:
"The romance in this book is as lush, wild and thorny as the magic roses that protect the doomed city of Yuan! This re-imagined version of classic Beauty and the Beast is all the more addicting because the two man characters are misfits who slowly develop their love through shared goals, secret whispers and intense chemistry."
or
Not Currently Available for Direct Purchase
Copyright © 2020 American Booksellers Association