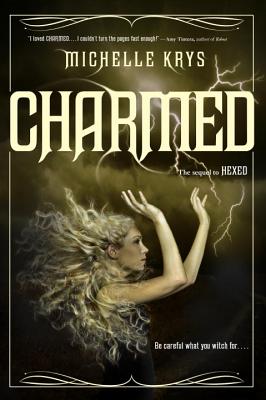 It’s The Craft meets Bring It On in Charmed, the sequel to Hexed, a supernatural read Amy Plum says, “left me spellbound!”

There’s only one place Paige could be, and it’s not on this earth.

Indie has spent the last few weeks frantically searching for Paige. She’s tried every spell imaginable, but witchcraft has gotten her nowhere, and she’s going crazy with guilt. Despite what her warlock boyfriend, Bishop, tells her, Indie knows it’s her fault her best friend was kidnapped by the Priory. And with the Priory destroyed, finding Paige feels more hopeless than ever—especially when Indie discovers that Paige isn’t even on Earth. She’s trapped in Los Demonios, an alternate dimension of Los Angeles filled with evil paranormals. No one who has gone there has ever come out.

Indie is desperate to find a way into the underworld prison. She’ll worry about getting out later. But facing the dark world’s most dangerous witches and warlocks on her own means keeping her plan hush-hush—and forging alliances with some sketchy people, including a seriously sexy sorcerer.

“Charmed left me spellbound!”—Amy Plum, author of the internationally bestselling Die for Me series

“Well worth picking up, as it stands out from the pack of modern fantasy with a meaty backstory and dark humor.” —Booklist

“Snappy dialogue, a satisfyingly epic battle, and unexpected heroes make for a conclusion that will satisfy.” —Kirkus Reviews

“Teens who enjoy paranormal witchcraft with a dose of Mean Girls mixed in will enjoy both Hexed and Charmed.” —VOYA

“Left me spellbound!” —Amy Plum, author of the internationally bestselling Die for Me series

“I loved CHARMED. . . . I couldn’t turn the pages fast enough!” —Amy Tintera, author of the REBOOT duology and the RUINED trilogy

“Swoon-worthy. . . . Snappy dialogue, a satisfyingly epic battle, and unexpected heroes make for a conclusion that will satisfy.” —Kirkus

“Witchcraft with a dose of Mean Girls.” —VOYA

“Well worth picking up.” —Booklist

“Wicked fun!” —Amy Plum, author of the Die for Me series

“A perfect mix of action, romance, and humor—Hexed kept me riveted until the very last page!” —Amy Tintera, author of the REBOOT duology and the RUINED trilogy

"Plenty of shocking twists and turns."—SLJ

“Fun and serious, magical and normal and intriguing and spellbinding all at the same time!”—The Guardian

“A delicious and fast-paced read! This one kept me up way past my bedtime!” —Julie Murphy, #1 New York Times bestselling author of Dumplin’

"[A] swiftly paced blend of mystery and psychological suspense."—PW

"Addictive . . . sure to appeal to fans of Sara Shepard’s Pretty Little Liars."—Booklist

MICHELLE KRYS is the author of Hexed and Charmed and the highly anticipated Dead Girls Society, coming November 2016. When she’s not writing books for teens, Michelle moonlights as a NICU nurse.  Michelle is probably not a witch, though she did belong to a witchcraft club in the fifth grade and “levitated” people in her bedroom, so that may be up for debate.  She lives in Thunder Bay, Ontario, Canada, with her family.