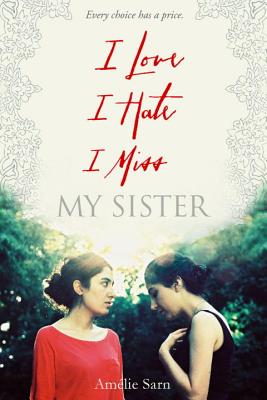 I Love I Hate I Miss My Sister

For readers of The Tyrant’s Daughter, Out of Nowhere, and I Am Malala, this poignant story about two Muslim sisters is about love, loss, religion, forgiveness, women’s rights, and freedom.

Two sisters. Two lives. One future.
Sohane loves no one more than her beautiful, carefree younger sister, Djelila. And she hates no one as much. They used to share everything. But now, Djelila is spending more time with her friends, partying, and hanging out with boys, while Sohane is becoming more religious.
When Sohane starts wearing a head scarf, her school threatens to expel her. Meanwhile, Djelila is harassed by neighborhood bullies for not being Muslim enough. Sohane can’t help thinking that Djelila deserves what she gets. But she never could have imagined just how far things would go. . . .

"Sarn’s poignant novel surely raises issues of religious freedom, but it is foremost a coming-of-age story about personal choice and the uniquely powerful bond between sisters."—The Horn Book Magazine

“A fair and balanced look at not just two equal and opposite perspectives on these issues, but at the multiple, refracted, messy nuances in between.”—The Bulletin

“A searing portrait of the conflicts within a culture.”—VOYA

“Sarn writes with concise, timely insight about culture, religion, and politics, but what lingers most is the powerful bonds of sisterhood.”—smithsonianapa.org

Amélie Sarn has written numerous novels, as well as comic books in her native France.
Loading...
or
Not Currently Available for Direct Purchase