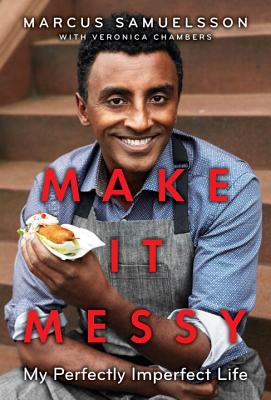 In this inspirational autobiography, world-famous chef and owner of Red Rooster Harlem, Marcus Samuelsson tells his extraordinary story and encourages young people to embrace their mistakes and follow their dreams. Based on his highly praised adult memoir, Yes, Chef, this young adult edition includes an 8-page black-and-white family photo insert.

Marcus Samuelsson’s life and his journey to the top of the food world have been anything but typical. Orphaned in Ethiopia, he was adopted by a loving couple in Sweden, where his new grandmother taught him to cook and inspired in him a lifelong passion for food. In time, that passion would lead him to train and cook in some of the finest, most demanding kitchens in Europe.

Samuelsson’s talent and ambition eventually led him to fulfill his dream of opening his own restaurant in New York City: Red Rooster Harlem, a highly acclaimed, multicultural dining room, where presidents rub elbows with jazz musicians, aspiring artists, and bus drivers. A place where anyone can feel at home.

"'Step up to the challenge; don't avoid it. Win or lose, take the shot.' Samuelsson neatly serves up inspiration and food for thought."--Kirkus Reviews

"The perfect book for teen foodies and a great choice for others, thanks to its . . .  compelling story . . .  and sound advice."--VOYA

"A delightful read. . . .Samuelsson effectively connects his love of food to his personal journey."--School Library Journal

MARCUS SAMUELSSON is an internationally acclaimed chef who caught the attention of the culinary world at the age of twenty-five, when he became the youngest person ever to receive a three-star review from the New York Times for his work at the New York City restaurant Aquavit. His iconic restaurant Red Rooster Harlem celebrates the roots of American cuisine in one of New York City’s liveliest and most culturally rich neighborhoods.

Marcus is the author of several cookbooks, including The Red Rooster Cookbook: The Story of Food and Hustle in Harlem, as well as the New York Times bestseller and James Beard Award-winning memoir Yes, Chef. He was a winner of Bravo’s Top Chef Masters and Food Network's Chopped All-Stars. He was honored to be a guest chef at the White House, where he planned and executed the Obama administration’s first state dinner, for the first family, the prime minister of India, and four hundred guests.

Marcus lives with his wife, Maya, in Harlem. He plays soccer on weekends and is constantly on the search for the best street food around. Follow him on Instagram, on Facebook and on Twitter at @marcuscooks.

VERONICA CHAMBERS is a prolific author, best known for her critically acclaimed memoir, Mama's Girl. She has written more than a dozen books for young readers, including Plus and the Amigas series. You can visit her online at veronicachambers.com.


Praise For Make It Messy: My Perfectly Imperfect Life…

"'Step up to the challenge; don't avoid it. Win or lose, take the shot.' Samuelsson neatly serves up inspiration and food for thought."--Kirkus Reviews

"The perfect book for teen foodies and a great choice for others, thanks to its . . .  compelling story . . .  and sound advice."--VOYA

"A delightful read. . . .Samuelsson effectively connects his love of food to his personal journey."--School Library Journal

"Samuelsson asserts . . . that three things have stood him in good stead: he is humble, he works hard, and he loves food. This smoothly written account, coauthored with [Veronica] Chambers, brings the drama of the kitchen to vivid and memorable life."--Booklist
or
Buy Here
Copyright © 2020 American Booksellers Association