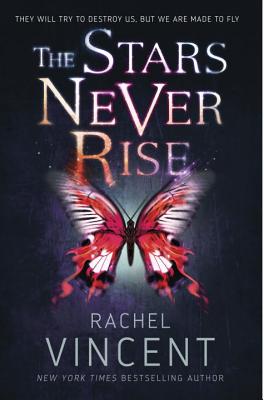 A girl must join forces with rogue exorcists to save her sister and, ultimately, humanity, in the first in a must-read paranormal duology from New York Times bestselling author Rachel Vincent.

The Church is everywhere.It runs the city. It defends the populace from the demons beyond the wall. But what if it's the church that should be feared?
Sixteen-year-old Nina Kane should be worrying about her immortal soul—hers is a world where they’re in short supply—but only she can protect her younger sister, Mellie, and Mellie’s unborn child, a child that the Church believes shouldn’t exist.
There are only two options. Mellie can pledge her life—and her baby’s life—to the Church. Or she and Nina can go on the run. They choose the latter. Because it's kill or be killed. To save her sister, Nina will need to put her trust in Finn, a fugitive and rogue exorcist. What they’ll do together will change the face of the world.
Holy hellfire, indeed.

And don't miss the spellbinding sequel, The Flame Never Dies.

“A hugely fun and entertaining read."--SLJ

"Vincent (the Soul Screamers series) carves out an intriguing niche in the post-apocalyptic landscape . . . plenty of reasons for readers to look forward to the next installment."--PW

“Eerily reminiscent of Margaret Atwood’s The Handmaid’s Tale . . . fans of Divergent and The Hunger Games will love the complexity of the setting and characters.”--VOYA

"The gritty world is compellingly presented . . . much to consider."--The Bulletin

“A devil of a thriller.”—Booklist

RACHEL VINCENT is the New York Times bestselling author of many books for adults and for teens, including the Shifters, Unbound, and Soul Screamer series, and the upcoming The Flame Never Dies. A resident of Oklahoma, she has two teenagers, two cats, and a BA in English, each of which contributes in some way to every book she writes. When she’s not working, Rachel can be found curled up with a book or watching movies and playing video games with her husband.
Loading...
or
Not Currently Available for Direct Purchase