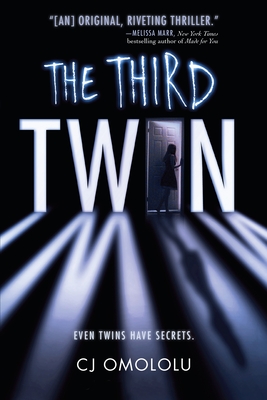 If you loved Natasha Preston's THE TWIN, you'll race through this edge-of-your seat thriller about identical twins with a shocking twist.

IT STARTED AS A JOKE.
When they were little, Lexi and her identical twin, Ava, made up a third sister, Alicia. If something broke? Alicia did it. Alicia was always to blame for everything.

NOW THE GAME IS ALL GROWN UP.
The girls are seniors, and they use Alicia as their cover to go out with guys who they'd never, ever be with in real life. But sometimes games just aren't worth playing. A boy has turned up dead, and DNA evidence and surveillance photos point to only one suspect—Alicia. The girl who doesn’t exist.

IDENTICAL TWINS. IDENTICAL DNA. IDENTICAL SUSPECTS.
Ava insists that if they keep following the rules for being Alicia, everything will be fine. But Lexi isn't so sure. She must find the truth before another boy is murdered.

BECAUSE EITHER AVA IS A KILLER . . . OR ALICIA IS REAL.


Praise for THE THIRD TWIN:

"[An] original, riveting thriller." -- Melissa Marr, New York Times bestselling author of Made for You

"Delicious and deceptive, The Third Twin is a twisty-turny thrill ride! I couldn't flip the pages fast enough!" --Kimberly Derting, author of The Taking

“Driven by the adrenaline pump of whodunit and who’s next to die.”—BCCB


Praise For The Third Twin…

“This compelling story filled with serpentine twists and turns will leave readers guessing at every step, and breathless at the climactic conclusion. Hand to readers who crave suspenseful, plot-driven thrillers.” —SLJ

“One of the best YA thrillers I’ve read—not only this year, but of all time.” —A Dream Within a Dream

“Any fan of Revenge and Pretty Little Liars will easily fall in love with The Third Twin . . . I found myself on edge, up late at night to know the truth.” —Once Upon a Twilight

“A thrilling and spellbinding mystery full of twists and turns . . . five stars.” —Fiktshun

“Brilliant storytelling . . . The Third Twin will keep you guessing until the very end!” —Me, My Shelf and I

CJ OMOLOLU was the author of the ALA-YALSA Quick Pick Dirty Little Secrets and several other YA novels. She loved to read but never thought to write until she discovered that the voices in her head often had interesting things to say. CJ Omololu passed away in 2015.
Loading...
or support indie stores by buying on
(This book is on backorder)