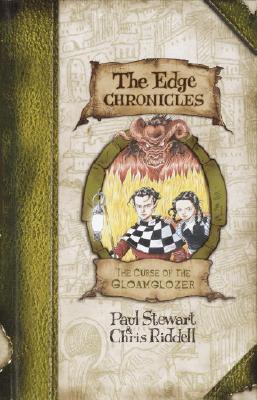 The Curse of the Gloamglozer

‘Oh, Sky above!’ Linius wailed. ‘If I had known then what I know now…’

Quint, son of a sky pirate captain, and new apprentice to Linius Pallitax, the Most High Academe, has been set some highly important tasks. Just how important, Quint is about to find out as he and Linius’s only daughter, Maris, are plunged into a terrifying adventure that takes them deep within the rock upon which Sanctaphrax is built. Here, they unwittingly invoke an ancient curse — the curse of the gloamglozer…

A dramatic and exuberant fantasy filled with colourful characters and illustrated with exquisite detail.

Praise For Edge Chronicles 4: The Curse of the Gloamglozer…

PRAISE FOR THE EDGE CHRONICLES:

"Sure to please the Potter fans."
–Detroit Free Press

"The narrative will cast a spell over readers from the beginning with its utterly odd, off-kilter sense of logic and a vocabulary that is equal parts Dr. Seuss and Lewis Carroll."
–Publishers Weekly

“A richly inventive fantasy . . . one of the most exciting collaborations between a writer and illustrator for a long time.”—The Literary Review (UK)

Paul Stewart is the author of many books for children including "The Midnight Hand" and "The Wakening." He lives in Brighton, England.

Chris Riddell has illustrated many books for children and has been shortlisted for the Kate Greenaway Medal and the Kurt Maschler Award. He is also the acclaimed political cartoonist for the "Guardian" and the" Observer." He lives in Sussex, England. "From the Hardcover edition."
Loading...
or
Not Currently Available for Direct Purchase