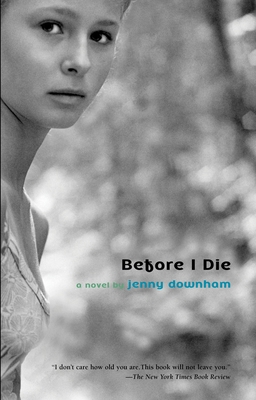 For the many readers who love The Fault in Our Stars, this is the story of a girl who is determined to live, love, and to write her own ending before her time is finally up.

Tessa has just months to live. Fighting back against hospital visits, endless tests, and drugs with excruciating side effects, Tessa compiles a list. It’s her To Do Before I Die list. And number one is Sex. Released from the constraints
of “normal” life, Tessa tastes new experiences to make her feel alive while her failing body struggles to keep up. Tessa’s feelings, her relationships with her father and brother, her estranged mother, her best friend, and her new boyfriend, are all painfully crystallized in the precious weeks before Tessa’s time runs out.

Praise For Before I Die…

Review, Entertainment Weekly, September 28, 2007
"In luminous prose that rings completely true, Downham earns every tear she wrings from her readers. I trust there will be many of them—many readers, and of course, many tears. A-"

This is Jenny Downham’s debut novel. She lives in England.
Loading...
or
Not Currently Available for Direct Purchase