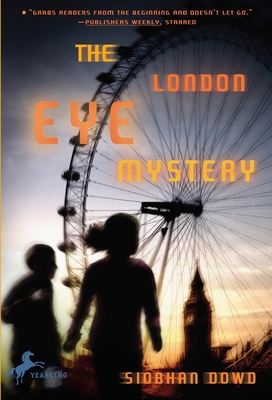 A five-star mystery now in paperback!

Ted and Kat watched their cousin Salim board the London Eye, but after half an hour it landed and everyone trooped off—except Salim. Where could he have gone? How on earth could he have disappeared into thin air? Ted and his older sister, Kat, become sleuthing partners, since the police are having no luck. Despite their prickly relationship, they overcome their differences to follow a trail of clues across London in a desperate bid to find their cousin. And ultimately it comes down to Ted, whose brain works in its own very unique way, to find the key to the mystery.

★ “Everything rings true here, the family relationships, the quirky connections of Ted’s mental circuitry, and, perhaps most surprising, the mystery.”—Booklist, Starred

★ “The best mysteries have at their centers gifted but very human sleuths—their abilities balanced by equally significant flaws or idiosyncrasies. This one is no exception.”—The Horn Book Magazine, Starred

Praise For The London Eye Mystery…

Siobhan Dowd was named one of the "top 100 Irish-Americans" for her global anti-censorship work with the writers’organization PEN America. Siobhan Dowd’s novels include A Swift Pure Cry, for which she was named a Publishers Weekly Flying Start author, and Bog Child. She died in August 2007 from breast cancer.
Loading...
or support indie stores by buying on