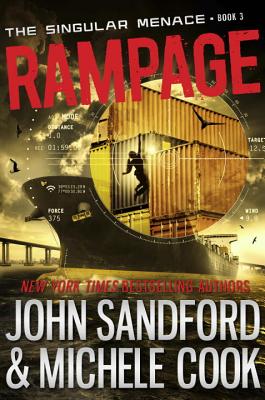 Shay Remby and her band of renegade activists have got the corrupt Singular Corporation on the run. Their expose is finally working. Or is it?

Even as revelations about the human experimental subjects break in the news, Singular’s employees are slithering out of sight. And then their CEO is killed in a plane crash... Was it a freak accident?  Or a cover-up?

Shay’s gang begins to see signs that there may be even more powerful figures than they knew managing events—publicly expressing outrage and mopping up the mess, but secretly gathering up their scientists and moving the operation further out of sight.

It will take nothing short of a rampage to stop the Singular menace for good...

★ “A fabulous mix of outlandish hijinks, techno-noir, and teen cheek--LA style. Not to be missed.”--Booklist

Praise For Rampage (The Singular Menace, 3)…

Praise for the Singular Menace series:

“A fabulous mix of outlandish hijinks, techno-noir, and teen cheek—LA style. Not to be missed.” —Booklist

“Any reader looking for an action-packed thriller should pick this up.” —Booklist

JOHN SANDFORD is the pseudonym of John Roswell Camp, an American author and journalist. Camp won the Pulitzer Prize in journalism in 1986. As John Sandford, he is the author of nearly forty novels, all of which have appeared on the New York Times Bestseller lists. You can read more about his work at JohnSandford.org.

MICHELE COOK is a former reporter specializing in crime and social justice. She and John met when they both worked at the St. Paul Pioneer Press. Michele is also a produced screenwriter. You can read more about this trilogy at TheSingularMenaceBooks.com.
Loading...
or
Not Currently Available for Direct Purchase