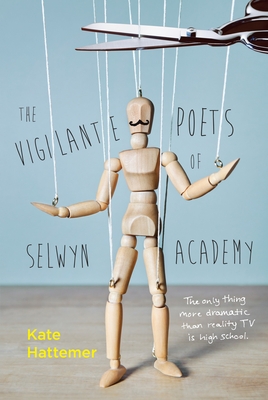 The Vigilante Poets of Selwyn Academy

Whip-smart dialogue and an inside look at the seedy underbelly of reality TV come together in this critically-acclaimed debut perfect for fans of Unreal, John Green, and Frank Portman.


Witty, sarcastic Ethan and his three best friends are students at Selwyn Arts Academy, which has been hijacked by For Art’s Sake, a sleazy reality-television show. In the tradition of Ezra Pound, the foursome secretly writes and distributes a long poem to protest the show. They’re thrilled to have started a budding rebellion.

But the forces behind the show are craftier than they seem. The web of betrayal stretches farther than Ethan could have ever imagined, and it’s up to him, his friends, and a heroic gerbil named Baconnaise to save Selwyn.

Praise For The Vigilante Poets of Selwyn Academy…

Starred review, Kirkus Reviews, March 1, 2014:
“A sparkling, timely tour of the complicated intersection where life meets art. . . . A treat from cover to cover.”

Starred review, Booklist, March 15, 2014:
“Relying on the passion and ideals that drive adolescence, this has a vibrancy and authenticity that will resonate with anyone who has fought for their beliefs—or who has loved a hamster. (You’ll see.)”

Starred review, VOYA, April 2014:
“Tricolons, espionage, and embezzlement: what is not to like? This brilliantly paced novel is a fresh look at life as an artistic teen. . . . [A] hilarious story of friendship and poetry.”

Starred review, Publishers Weekly, June 23, 2014:
“The tension between cynicism and naïveté, knowledge and innocence in these brainy but still maturing kids is astutely evoked, and readers will be right there alongside them for every protest, misstep, and loss.”

Kate Hattemer taught high school Latin for three years and now works at an independent bookstore in Cincinnati. She delivered an epic poem at her university graduation ceremony, and is also the author of The Land of 10,000 Madonnas. Learn more about Kate and her books at KateHattemer.com.
Loading...
or
Not Currently Available for Direct Purchase