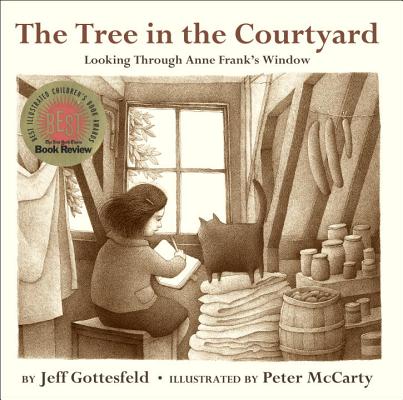 The Tree in the Courtyard

Told from the perspective of the tree outside Anne Frank's window—and illustrated by a Caldecott Honor artist—this book introduces her story in a gentle and incredibly powerful way to a young audience.

The tree in the courtyard was a horse chestnut. Her leaves were green stars; her flowers foaming cones of white and pink. Seagulls flocked to her shade. She spread roots and reached skyward in peace.

The tree watched a little girl, who played and laughed and wrote in a diary. When strangers invaded the city and warplanes roared overhead, the tree watched the girl peek out of the curtained window of the annex. It watched as she and her family were taken away—and when her father returned after the war, alone.

The tree died the summer Anne Frank would have turned eighty-one, but its seeds and saplings have been planted around the world as a symbol of peace. Its story, and Anne’s story, are beautifully told and illustrated in this powerful picture book.

Praise For The Tree in the Courtyard: Looking Through Anne Frank's Window…

“…[T]he spare text and delicate illustrations create a moving and powerful ode to the tree that gave Anne comfort and hope during the years she and her family hid from the Nazis…A noteworthy and highly recommended introduction to a difficult and significant topic.”
—School Library Journal starred review

Jeff Gottesfeld is an acclaimed writer for page, stage, and screen. His work has won awards from the American Library Association, the Writers Guild of America, and the National Council for the Social Studies. He has previously written for adult, teen, and middle-grade audiences, and this is his first picture book. He is based in Los Angeles, California. Visit him at jeffgottesfeldwrites.com

Peter McCarty is the author and illustrator of many award-winning books for children. His books have garnered a number of accolades, including a Caldecott Honor and a New York Times Best Illustrated Book of the Year citation. He lives with his family in upstate New York. Visit him at petermccarty.net
Loading...
or support indie stores by buying on