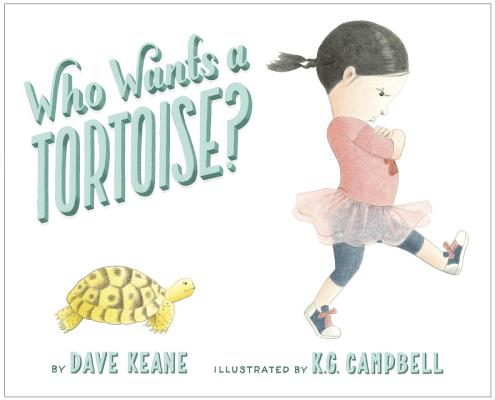 Who Wants a Tortoise?


Could there be any better pet than a puppy? One young girl is about to find out. From beloved author Dave Keane and acclaimed illustrator K.G. Campbell, a laugh-out-loud story of unexpected friendship!


When the spunky, loveable narrator receives a tortoise for her birthday, instead of the cuddly puppy she’s longed for her entire life, she’s more than a little disappointed.  But while her new lump of a pet isn’t what she dreamed of, it doesn’t take long—between tortoise-on-skateboard walks, sparkly shell makeovers, and a lemonade stand selling chances to hold a real life tortoise—for the little girl to change her mind—sort of.  But when her pet goes missing, all she wants is to be reunited with her new best friend.

Praise For Who Wants a Tortoise?…

"The narrator’s initial petulance, revealed in the frank narrative and soft pictures done in watercolor and colored pencils, is both entertaining and realistic. Sensitive readers may develop feelings for the innocent tortoise long before she does, which makes for a satisfying ending."—The Horn Book Magazine starred review

Dave Keane is the author of Sloppy Joe and Bobby Bramble Loses His Brain. He lives in Northern California, where his family pet is a tortoise named Shelly! Visit him at mrdavekeane.com. Follow Dave on Twitter, @MrDaveKeane.

K.G Campbell was born in Kenya, but raised and educated in Scotland. He has illustrated the Newbury Award winning Flora and Ulysses by Kate DiCamillo and Lester’s Dreadful Sweaters, which he also wrote. K.G. lives in California. Visit him at kgcampbell.com and follow him on Twitter, @KGCampbell2.
Loading...
or
Not Currently Available for Direct Purchase