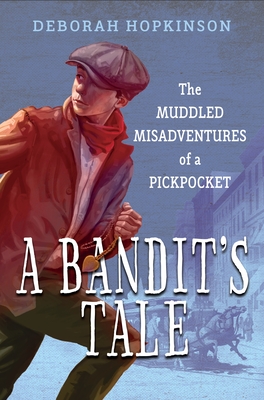 The Muddled Misadventures of a Pickpocket

From an award-winning author of historical fiction comes a story of survival, crime, adventure, and horses in the streets of 19th century New York City.

Eleven-year-old Rocco is an Italian immigrant who finds himself alone in New York City after he's sold to a padrone by his poverty-stricken parents. While working as a street musician, he meets the boys of the infamous Bandits' Roost, who teach him the art of pickpocketing. Rocco embraces his new life of crime—he's good at it, and it's more lucrative than banging a triangle on the street corner. But when he meets Meddlin' Mary, a strong-hearted Irish girl who's determined to help the horses of New York City, things begin to change. Rocco begins to reexamine his life—and take his future into his own hands.

DEBORAH HOPKINSON has written many award-winning author books for children. Her most recent picture book for Schwartz & Wade Books is Beatrix Potter and the Unfortunate Tale of a Borrowed Guinea Pig. Her most recent historical fiction from Knopf is The Great Trouble, A Mystery of London, the Blue Death, and a Boy Called Eel, which has been featured on more than a dozen state award lists and was a finalist for the Oregon Book Award. Visit her online at DeborahHopkinson.com, and follow her on Twitter at @deborahhopkinson. She lives in West Linn, OR.

Praise For A Bandit's Tale: The Muddled Misadventures of a Pickpocket…

"A strong choice for fans of Rodman Philbrick’s The Mostly True Adventures of Homer P. Figg ​(Scholastic, 2009) and those who enjoy adventures about scrappy and resourceful kids who have to rely on their own smarts and the kindness of strangers to change their lives." —School Library Journal starred review