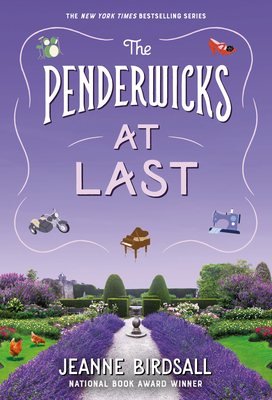 The Penderwicks at Last

“Much weepy love for the last of the Penderwick books. It took mere pages to draw me back in and it should come as no surprise that Jeanne Birdsall has triumphed again. As the Penderwicks return to Arundel, the house where it all began, there are all the elements that you’d expect from a rousing Penderwick adventure, including music, dogs, new friends, and an appearance from the dreaded Mrs. Tifton. The stories about these Penderwick girls and the extended family and friends that they have gained along the way are magical, charming, funny, and real. From the very beginning, the Penderwick books have been modern and classic at the same time. I am sad to leave them but grateful for the years I have spent with them.”
— Lorna Ruby, Wellesley Books, Wellesley, MA
View the List

Return to the place where it all began for a Penderwick wedding--and the finale to a National Book Award winning and New York Times bestselling series!

Lydia's older sister Rosalind is getting married and in the most perfect setting--Arundel! Now, the entire family is going back to the spot where they met their "honorary brother" Jeffrey and had endless adventures!

And sure enough, the adventures do not stop. There are close calls involving almost too many dogs to count, dances at bus stops. and the reappearance of a longtime enemy. But most of all, there are six siblings with a bond that's as unshakeable as ever.

The Penderwicks at Last may be the end of a cherished series, but the family we love will never be forgotten.

Praise For The Penderwicks at Last…

"Beautifully crafted, both in descriptions and characterizations, this makes for a fitting end to a much-praised series."—Booklist, starred review

Jeanne Birdsall is the National Book Award–winning author of the children's book The Penderwicks and its sequel, The Penderwicks on Gardam Street, both of which were also New York Times bestsellers. She grew up in the suburbs west of Philadelphia, where she attended wonderful public schools. Although Birdsall first decided to become a writer when she was 10 years old, it took her until she was 41 to get started. In the years in between, Birdsall had many strange jobs to support herself while working hard as a photographer. Birdsall's photographs are included in the permanent collections of museums, including the Smithsonian and the Philadelphia Art Museum. She lives with her husband in Northampton, Massachusetts. Their house is old and comfortable, full of unruly animals, and surrounded by gardens.
Loading...
or support indie stores by buying on