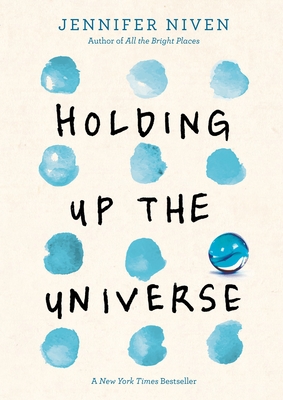 Holding Up the Universe

From the author of the New York Times bestseller All the Bright Places comes a heart-wrenching story about what it means to see someone—and love someone—for who they truly are.

Everyone thinks they know Libby Strout, the girl once dubbed “America’s Fattest Teen.” But no one’s taken the time to look past her weight to get to know who she really is. Following her mom’s death, she’s been picking up the pieces in the privacy of her home, dealing with her heartbroken father and her own grief. Now, Libby’s ready: for high school, for new friends, for love, and for EVERY POSSIBILITY LIFE HAS TO OFFER. In that moment, I know the part I want to play here at MVB High. I want to be the girl who can do anything.

Everyone thinks they know Jack Masselin, too. Yes, he’s got swagger, but he’s also mastered the impossible art of giving people what they want, of fitting in. What no one knows is that Jack has a newly acquired secret: he can’t recognize faces. Even his own brothers are strangers to him. He’s the guy who can re-engineer and rebuild anything in new and bad-ass ways, but he can’t understand what’s going on with the inner workings of his brain. So he tells himself to play it cool: Be charming. Be hilarious. Don’t get too close to anyone.

Until he meets Libby. When the two get tangled up in a cruel high school game—which lands them in group counseling and community service—Libby and Jack are both pissed, and then surprised. Because the more time they spend together, the less alone they feel. . . . Because sometimes when you meet someone, it changes the world, theirs and yours.

Jennifer Niven delivers another poignant, exhilarating love story about finding that person who sees you for who you are—and seeing them right back.

"Niven is adept at creating characters. . . . [Libby's] courage and body-positivity make for a joyful reading experience." --The New York Times

"Want a love story that will give you all the feels? . . . You'll seriously melt!" —Seventeen Magazine

Praise For Holding Up the Universe…

★ "Written in short chapters of alternating perspectives, this is a thoughtful exploration of identity and self-acceptance, with commentary on overcoming adversities that will hit close to home." —School Library Journal starred review

★ "This is a worthy addition to any young adult collection; the story is engaging and difficult to put down." —VOYA starred review

"Niven’s honest writing shares a story of friendship, confidence, strength, and identity—and it’s not one to be missed." —Buzzfeed

"Libby and Jack are two characters who will reach out of the page and climb into your heart! . . . [A] beautiful love story." —Justine Magazine

"A novel about love and how important it is to be seen." —Popsugar

"Moving. . . . The true heart of the tale lies in personal growth and learning to love yourself." —Bookish

“I've never fallen in love with characters as fast as I fell for Libby and Jack. . . . Holding Up the Universe is a beautiful reminder of the power of understanding.” —Jay Asher, #1 New York Times bestselling author of Thirteen Reasons Why

“Gorgeously written and oh-so-deeply felt, Holding Up the Universe contains one of my favorite characters of all time! You will absolutely fall in love with Libby Strout!” —Nicola Yoon, #1 New York Times bestselling author of Everything, Everything

“At once hilarious and achingly poignant, Jennifer Niven’s Holding up the Universe brims with love and heart and hope. A gorgeous, life-affirming book that—like its lovable and resilient main character, Libby—will make you want to open your arms wide, lift your face to the sky, and twirl.” —Kerry Kletter, author of The First Time She Drowned

Praise for All the Bright Places:

“A do-not-miss for fans of Eleanor & Park and The Fault in Our Stars, and basically anyone who can breathe.” —Justine Magazine

“At the heart—a big one—of All the Bright Places lies a charming love story about this unlikely and endearing pair of broken teenagers.” —The New York Times Book Review

Jennifer Niven is the author of the New York Times and international bestseller All the Bright Places. She has also written four novels for adults—American Blonde, Becoming Clementine, Velva Jean Learns to Fly, and Velva Jean Learns to Drive—as well as three nonfiction books—The Ice Master, Ada Blackjack, and The Aqua Net Diaries, a memoir about her high school experiences. She grew up in Indiana and now lives with her fiancé and literary cats in Los Angeles. For more information, visit JenniferNiven.com, GermMagazine.com, or find her on Facebook or Twitter.
Loading...
or support indie stores by buying on