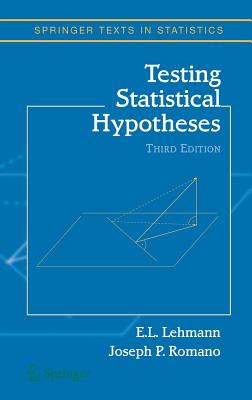 The Third Edition of Testing Statistical Hypotheses brings it into consonance with the Second Edition of its companion volume on point estimation (Lehmann and Casella, 1998) to which we shall refer as TPE2. We won't here comment on the long history of the book which is recounted in Lehmann (1997) but shall use this Preface to indicate the principal changes from the 2nd Edition. The present volume is divided into two parts. Part I (Chapters 1-10) treats small-sample theory, while Part II (Chapters 11-15) treats large-sample theory. The preface to the 2nd Edition stated that "the most important omission is an adequate treatment of optimality paralleling that given for estimation in TPE." We shall here remedy this failure by treating the di?cult topic of asymptotic optimality (in Chapter 13) together with the large-sample tools needed for this purpose (in Chapters 11 and 12). Having developed these tools, we use them in Chapter 14 to give a much fuller treatment of tests of goodness of 't than was possible in the 2nd Edition, and in Chapter 15 to provide an introduction to the bootstrap and related techniques. Various large-sample considerations that in the Second Edition were discussed in earlier chapters now have been moved to Chapter 11.

E.L. Lehmann is Professor of Statistics Emeritus at the University of California, Berkeley. He is a member of the National Academy of Sciences and the American Academy of Arts and Sciences, and the recipient of honorary degrees from the University of Leiden, The Netherlands and the University of Chicago. He is the author of Elements of Large-Sample Theory and (with George Casella) he is also the author of Theory of Point Estimation, Second Edition. Joseph P. Romano is Professor of Statistics at Stanford University. He is a recipient of a Presidential Young Investigator Award and a Fellow of the Institute of Mathematical Statistics. He has coauthored two other books, Subsampling with Dimitris Politis and Michael Wolf, and Counterexamples in Probability and Statistics with Andrew Siegel.
Loading...
or support indie stores by buying on