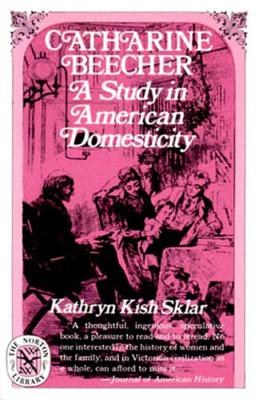 A Study in American Domesticity

“A thoughtful, ingenious, speculative book, a pleasure to read and to reread. No one interested in the history of women and the family, and in Victorian civilization as a whole, can afford to miss it.” —Journal of American History

Although she is often remembered only as the sister of Harriet Beecher Stowe and Henry Ward Beecher, there was a time in Catharine Beecher’s life when she was more widely known than any member of her eminent family. A pioneering teacher, a writer on moral and religious topics, and an avid publicist for women’s education, her name became a household word in the 1840s because of the enormous success of her Treatise on Domestic Economy. This comprehensive guide to all aspects of domestic self-management was part of her effort to create a female domain from which cultural power could be exercised. In the recent reassessment of the historical experience of women, the middle decades of the last century have emerged as a critical period: the movement for women’s rights was born, and the genteel cult of the lady and the encumbering customs of domesticity took hold. Present-day attitudes about the family and images of masculine and feminine roles are still strongly shaped by nineteenth-century ideas. Catherine Beecher: A Study in American Domesticity examines that era through the life of one of its major protagonists. It offers new insights into the shifting contours of the nineteenth-century female experience and is a signal contribution to the intellectual and social history of the period.