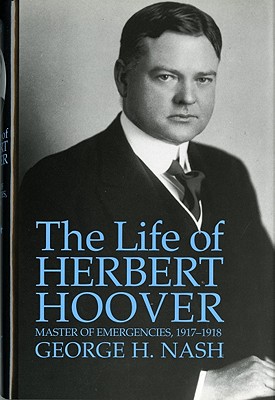 The Life of Herbert Hoover

The third volume in what the National Review has called a "magisterial work of scholarship on one of our least-known presidents, and an important era in American history."

National Review has called a "magisterial work of scholarship on one of our least-known presidents, and an important era in American history."

The entry of the United States into the First World War in late 1911 found Herbert Hoover at a crossroads. Three years earlier, he had been a successful mining engineer in London. Then, as the war intensified in Europe, Hoover founded and led the Commission for Relief in Belgium, which provided desperately needed fuel to more than nine million Belgian and French citizens trapped between the German army of occupation and the British naval blockade. That emergency undertaking eventually evolved into one of the greatest humanitarian enterprises in history. It also brought Hoover into international prominence.

Here Herbert Hoover moves toward Washington and center stage in his own country. Shortly after the United States's declaration of war, he entered into able service under Woodrow Wilson as a member of the President's War Cabinet and U.S. Food Administration. His goal was to standardize food production to control surging food prices, and to create surpluses of exportable foodstuffs for America's allies. "Food will win the war" became Hoover's slogan.

Hoover encountered the tumult of district politics and became both agent and catalyst of the moment in American lives when a traditionally decentralized economy was coming under price control and other forms of governmental restraint. We see Hoover as builder and bureaucrat, a man who brought force, drive, and ability into the service of his country.

Thanks to Mr. Nash's immense skill as a scholar-biographer, we can at last begin to see Herbert Hoover whole. Succeeding volumes will surely make this one of the great biographies in American political history.