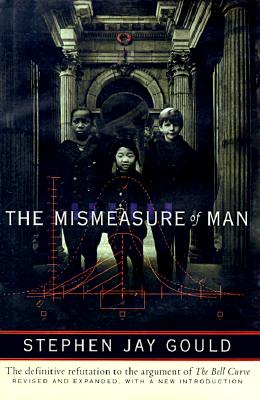 The Mismeasure of Man (Hardcover)

The definitive refutation to the argument of The Bell Curve.

When published in 1981, The Mismeasure of Man was immediately hailed as a masterwork, the ringing answer to those who would classify people, rank them according to their supposed genetic gifts and limits.

Yet the idea of biology as destiny dies hard, as witness the attention devoted to The Bell Curve, whose arguments are here so effectively anticipated and thoroughly undermined. In this edition, Stephen Jay Gould has written a substantial new introduction telling how and why he wrote the book and tracing the subsequent history of the controversy on innateness right through The Bell Curve. Further, he has added five essays on questions of The Bell Curve in particular and on race, racism, and biological determinism in general. These additions strengthen the book's claim to be, as Leo J. Kamin of Princeton University has said, "a major contribution toward deflating pseudo-biological 'explanations' of our present social woes."

Stephen Jay Gould (1941-2002) was the Alexander Agassiz Professor of Zoology and Professor of Geology at Harvard University. He published over twenty books, received the National Book and National Book Critics Circle Awards, and a MacArthur Fellowship.

Praise For The Mismeasure of Man…

A rare book-at once of great importance and wonderful to read.
or
Not Currently Available for Direct Purchase
Copyright © 2020 American Booksellers Association