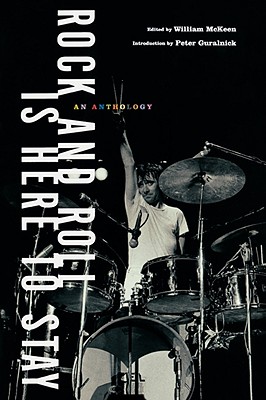 Rock and Roll Is Here To Stay (Hardcover)

"If you like rock and roll, you'll love this raunchy, rollicking anthology—great writers, great music, and astounding musicians dead and alive." —Carl Hiaasen

An electrifying collection of the finest, most entertaining, and illuminating writing on and from the rock and roll scene--from its earliest days to the present, from the brightest moments of the biggest stars to obscure but compellingly significant treasures. The crazy, exhilarating, endlessly creative world of rock and roll has fascinated us--and some of our best writers--since the earliest days of the genre. William McKeen has assembled in this book the writing of those who played the music and pushed it to new limits, as well as those who were on the scene to witness and celebrate its magic. The story of rock and roll music and the rock and roll life lifts from these pages with marvelous immediacy, in selections ranging from Bruce Springsteen on his experience of backing up Chuck Berry, to Joan Didion sitting in on a Doors recording session, to Henry Rollins on Madonna, to Roddy Doyle's The Commitments. Tom Wolfe, Patti Smith, Don DeLillo, John Lennon, Frank Zappa, Nick Hornby, and many others contribute to this portrait of the music and its culture from its ancestors in the blues to its latest variants beyond grunge and rap. The book is organized into sections that create provocative and eye-opening juxtapositions, from "Superstardom" to "Weirdness," from "Present at the Creation" to "Soul." A section on rock critics shows how these writers matched the music with their own sharp rhythm, while "Tributes" rounds off the volume by remembering in their glory some of the greats who are making noise in the hereafter.

William McKeen, chair of the journalism department at Boston University, has written or edited thirteen books including Outlaw Journalist, Highway 61, and Everybody Had an Ocean.
or support indie stores by buying on
Copyright © 2020 American Booksellers Association