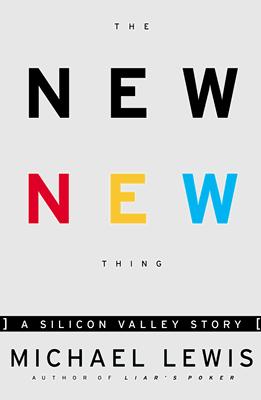 In the weird glow of the dying millennium, Michael Lewis sets out on a safari through Silicon Valley to find the world's most important technology entrepreneur, the man who embodies the spirit of the coming age. He finds him in Jim Clark, who is about to create his third, separate, billion-dollar company: first Silicon Graphics, then Netscape-which launched the Information Age-and now Healtheon, a startup that may turn the $1 trillion healthcare industry on its head.

Despite the variety of his achievements, Clark thinks of himself mainly as the creator of Hyperion, which happens to be a sailboat . . . not just an ordinary yacht, but the world's largest single-mast vessel, a machine more complex than a 747. Clark claims he will be able to sail it via computer from his desk in San Francisco, and the new code may contain the seeds of his next billion-dollar coup.

On the wings of Lewis's celebrated storytelling, the reader takes the ride of a lifetime through this strange landscape of geeks and billionaires. We get the inside story of the battle between Netscape and Microsoft; we sit in the room as Clark tries to persuade the investment bankers that Healtheon is the next Microsoft; we get queasy as Clark pits his boat against the rage of the North Atlantic in winter. And in every brilliant anecdote and character sketch, Lewis is drawing us a map of markets and free enterprise in the twenty-first century.


Praise For The New New Thing: A Silicon Valley Story…

The most significant business story since the days of Henry Ford... Lewis achieves a novelistic elegance.
— Boston Globe

It is a splendid, entirely satisfying book, intelligent and fun and revealing and troubling in the correct proportions, resolutely skeptical but not at all cynical...
— Kurt Andersen - The New York Times Book Review

[R]emarkable....Clark proves to be a character as enthralling as any in American fiction or non-fiction....Lewis tells a great story in this book, with prose that ranges from the beautiful to the witty to the breathtaking.
— Fred Moody - Wall Street Journal

Michael Lewis is the best-selling author of Liar’s Poker, Moneyball, The Blind Side, The Big Short, The Undoing Project, and The Fifth Risk. He lives in Berkeley, California, with his wife and three children.
Loading...
or
Not Currently Available for Direct Purchase