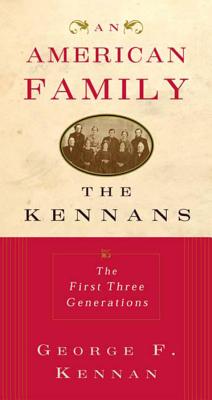 "One of the wisest men in American public life today." —James Chace

Accompany George Kennan as he explores his family's roots in the American past.

George F. Kennan has forged one of the most illustrious careers in the annals of American letters and politics. His prophetic American Diplomacy influenced several generations of Cold War policy makers, and Sketches from a Life, one of the most lyrical accounts of a life in public service ever written, chronicled his extraordinary diplomatic career spanning more than half a century. As a consummate statesman and prolific writer, Kennan has distinguished himself as one of the most influential figures of the twentieth century.

Now in his late nineties, Kennan turns an eye to a matter closer to his heart in An American Family: The Kennans. Embarking on a genealogical journey spanning several decades, he traces the roots of the Kennan family back more than five generations, discovering a family history that has all the makings of a classic American story. Beginning with the Kennans' life of unmitigated poverty in Scotland in the late seventeenth and early eighteenth centuries, An American Family details the Kennan family's passage to America and the hardships they faced as early settlers in Connecticut and Massachusetts, "the epitome of the backcountry family of the most remote northern fringes of New England life." He adroitly captures life in colonial times and in the period following the Revolutionary War, and chronicles the major events of a nation's early history with the rare intimacy of a family member reflecting on his forebears.

Filled with lively and sometimes haunting vignettes collected from archives and libraries across New England, An American Family is a fascinating detective story and brings to fruition a family memoir begun by Kennan's grandfather nearly a century ago. Graceful yet revealing, it is a cherished reminder of three hundred years of a nation's history through the eyes and words of one of America's most remarkable sons.

George F. Kennan was America’s most acclaimed Cold War diplomat as well as a prize-winning historian and author.
Loading...
or
Not Currently Available for Direct Purchase