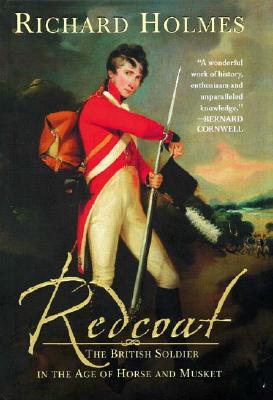 The British Soldier in the Age of Horse and Musket

A rich, anecdotal history of the British soldier from the American Revolution through the Indian Mutiny.

Redcoat is the story of the British soldier—those noncommissioned men whom Kipling called "the backbone of the army"—from roughly 1760 to 1860. Based on the letters and diaries of the men who served and the women who followed them, this book is rich in the history of a fascinating era. Among the highlights are Wolfe's victory and death at Quebec, Wellington's Peninsular War, Waterloo, the retreat from Kabul, the Crimean War, and the Indian Mutiny. The focus of Redcoat, however, is on the individual recollections and experiences of the ordinary soldiers in the wars of Georgian and early Victorian England. Through their stories and anecdotes—of uniforms, equipment, floggings, wounds, food, barrack life, courage, comradeship, death, love, and loss—Richard Holmes provides a comprehensive portrait of an extraordinarily successful fighting force.

Richard Holmes is a celebrated military historian. He lives in England.
Loading...
or
Not Currently Available for Direct Purchase