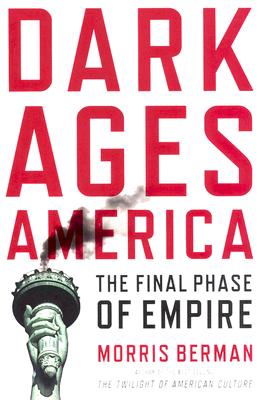 The Final Phase of Empire

In Dark Ages America, the pundit Morris Berman argues that the nation has entered a dangerous phase in its historical development from which there is no return.

As the corporate-consumerist juggernaut that now defines the nation rolls on, the very factors that once propelled America to greatness—extreme individualism, territorial and economic expansion, and the pursuit of material wealth—are, paradoxically, the nails in our collective coffin. Within a few decades, Berman argues, the United States will be marginalized on the world stage, its hegemony replaced by China or the European Union. With the United States just one terrorist attack away from a police state, Berman's book is a controversial and illuminating look at our current society and its ills.


Praise For Dark Ages America: The Final Phase of Empire…

Berman assembles with uncommon clarity a vast amount of scholarship, data, and commentary in support of conclusions that most readers will resist.
— Gresham Riley - Philadelphia Inquirer

Morris Berman is a cultural historian and the author of The Twilight of American Culture. He has held a number of university appointments, most recently as Visiting Professor of Sociology at the Catholic University of America in Washington, DC.
Loading...
or
Not Currently Available for Direct Purchase