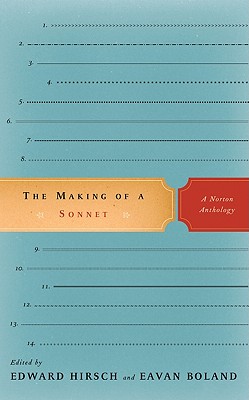 The Making of a Sonnet

An enlightening, celebratory anthology of the most classic and enduring of forms by two major poets.

This illuminating anthology of five and a half centuries of the sonnet follows the form through its various moments and makers. The editors, poets themselves, pay particular attention to the way in which the sonnet thrived or waned over the centuries. They also focus on the way in which individual poets claimed these fourteen lines: lengthened them, shortened them, elaborated on them, and were in turn defined by them. Three sections—“The Sonnet in the Mirror,” “The Sonnet Goes to Different Lengths,” and “The Sonnet Around the World”—show the extraordinary durability of this form and the ways in which poets have proved ingenious at reinventing it. Along with approximately three hundred sonnets and a “sonnet workshop,” the editors pay particular attention to the craft and history of the form following it through its various adventures, right up to its extraordinary resurgence in contemporary poetry.

Eavan Boland (1944—2020) was the author of more than a dozen volumes of poetry, including Outside History and several volumes of nonfiction, and was coeditor of the anthology The Making of Poem. Born in Dublin, Ireland, she was one of the foremost female voices in Irish literature. She received a Lannan Foundation Award and an American Ireland Fund Literary Award, among other honors. She taught at Trinity College Dublin, University College Dublin, Bowdoin College, and Stanford University, where she was the director of the creative writing program.

Edward Hirsch has published seven books of poems, including Special Orders. He lives in New York City.
Loading...
or
Not Currently Available for Direct Purchase