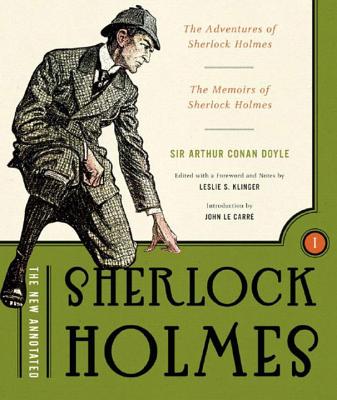 The publication of Leslie S. Klinger's brilliant new annotations of Sir Arthur Conan Doyle's classic Holmes short stories in 2004 created a Holmes sensation. Available again in an attractively-priced edition identical to the first, except this edition has no outer slipcase (Volume Two is available separately).

Inside, readers will find all the short stories from The Adventures of Sherlock Holmes and The Memoirs of Sherlock Holmes, with a cornucopia of insights: beginners will benefit from Klinger's insightful biographies of Holmes, Watson, and Conan Doyle; history lovers will revel in the wealth of Victorian literary and cultural details; Sherlockian fanatics will puzzle over tantalizing new theories; art lovers will thrill to the 450-plus illustrations, which make this the most lavishly illustrated edition of the Holmes tales ever produced. The New Annotated Sherlock Holmes illuminates the timeless genius of Arthur Conan Doyle for an entirely new generation of readers.

Sir Arthur Conan Doyle (1859-1930) is most noted for his Sherlock Holmes detective stories. He was a prolific writer whose other works include a wide range of science fiction stories, historical novels, romances, poetry, and nonfiction.

John le Carré is a noted English author of espionage novels. His many acclaimed books include The Spy Who Came in from the Cold; Tinker, Tailor, Soldier, Spy; The Tailor of Panama; The Russia House, and The Constant Gardener.
or support indie stores by buying on
Copyright © 2020 American Booksellers Association