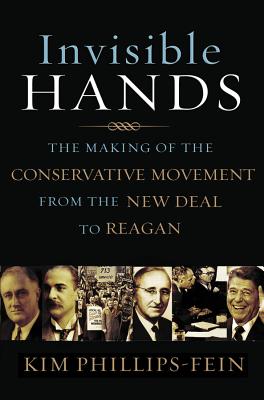 A narrative history of the influential businessmen who fought to roll back the New Deal.

Starting in the mid-1930s, a handful of prominent American businessmen forged alliances with the aim of rescuing America--and their profit margins--from socialism and the "nanny state." Long before the "culture wars" usually associated with the rise of conservative politics, these driven individuals funded think tanks, fought labor unions, and formed organizations to market their views. These nearly unknown, larger-than-life, and sometimes eccentric personalities--such as GE's zealous, silver-tongued Lemuel Ricketts Boulware and the self-described "revolutionary" Jasper Crane of DuPont--make for a fascinating, behind-the-scenes view of American history.

The winner of a prestigious academic award for her original research on this book, Kim Phillips-Fein is already being heralded as an important new young American historian. Her meticulous research and narrative gifts reveal the dramatic story of a pragmatic, step-by-step, check-by-check campaign to promote an ideological revolution--one that ultimately helped propel conservative ideas to electoral triumph.

Kim Phillips-Fein is the author of Fear City: New York's Fiscal Crisis and the Rise of Austerity Politics, a finalist for the Pulitzer Prize, and Invisible Hands: The Businessmen’s Crusade Against the New Deal. She teaches history at New York University's Gallatin School of Individualized Study, and has written for The Nation, Dissent, The Baffler, The Atlantic, and The New York Times, among other publications. She lives in New York City.
Loading...
or
Not Currently Available for Direct Purchase