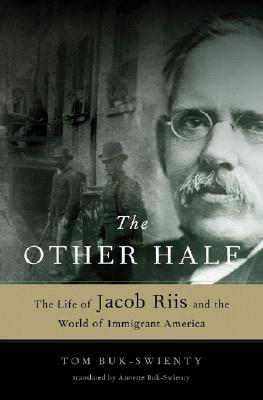 The Life of Jacob Riis and the World of Immigrant America

Social reformer Jacob Riis made it impossible for Americans to look the other way; now this inspiring biography restores his greatness.

Drawing on previously unexamined diaries and letters, The Other Half marvelously re-creates the moving story of Jacob Riis, the legendary Progressive reformer and muckraking photographer. Born in 1849 in rural Denmark, Riis immigrated to America in 1870 following a devastating romantic breakup. Penniless and starving, Riis stumbled into journalism, eventually becoming a charismatic police reporter for the New York Tribune, where he befriended Theodore Roosevelt and witnessed firsthand the appalling tenement conditions of late nineteenth-century New York. His resulting exposé, How the Other Half Lives, was the first major American muckraking book. It brought Americans in touch with their lost humanity, establishing a precedent for Ida Tarbell, Lincoln Steffens, Jane Addams, and Upton Sinclair. Described by Roosevelt as "the ideal American," Riis died in 1914, mourned by millions, a celebrated hero. Tom Buk-Swienty's long-awaited biography, a superb evocation of the muckraking era, is a compelling work, designed with 55 haunting images from Riis's own photographic oeuvre.

Tom Buk-Swienty, a Danish historian, has been the U.S. correspondent for several major Danish newspapers. A former Fellow at the Cullman Center of the New York Public Library, he now teaches at the University of Southern Denmark.

Annette Buk-Swienty lives in southern Denmark with her husband, historian Tom Buk-Swienty, and their two children.
Loading...
or support indie stores by buying on
(This book is on backorder)