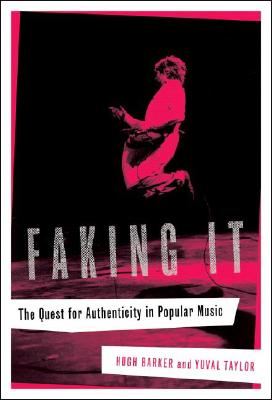 The Quest for Authenticity in Popular Music

Musicians strive to “keep it real”; listeners condemn “fakes”; ... but does great music really need to be authentic?

Did Elvis sing from the heart, or was he just acting? Were the Sex Pistols more real than disco? Why do so many musicians base their approach on being authentic, and why do music buffs fall for it every time? By investigating this obsession in the last century through the stories of John Lennon, Kurt Cobain, Jimmie Rodgers, Donna Summer, Leadbelly, Neil Young, Moby, and others, Faking It rethinks what makes popular music work. Along the way, the authors discuss the segregation of music in the South, investigate the predominance of self-absorption in modern pop, reassess the rebellious ridiculousness of rockabilly and disco, and delineate how the quest for authenticity has not only made some music great and some music terrible but also shaped in a fundamental way the development of popular music in our time.

Hugh Barker, formerly a musician and songwriter, works in publishing in London.

Yuval Taylor is the coauthor of Darkest America: Black Minstrelsy from Slavery to Hip-Hop and Faking It: The Quest for Authenticity in Popular Music. His writing has appeared in the Guardian, the Antioch Review, the Oxford American, and other publications. He lives in Chicago.
Loading...
or
Not Currently Available for Direct Purchase