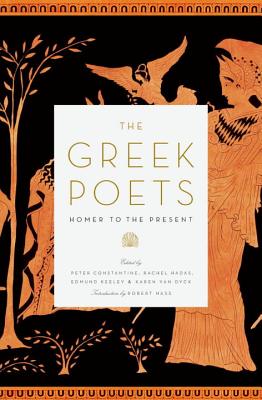 Homer to the Present

Three thousand years of the greatest Greek poetry, exquisitely translated and assembled in a handsome volume sure to be a modern classic.

This landmark volume captures three millennia of Greek poetry—more than 1,000 poems and 200 poets. From the epics of Homeric Greece to the historical and erotic ironies of Cavafy, from the romances, hymns, and bawdy rhymes of Byzantium to the innovative voices of a resurgent twentieth century, this anthology brings together the diverse strands of the Greek poetic tradition. The favorites are all here—raging Achilles, restless Odysseus, strong-hearted Penelope—but The Greek Poets also presents neglected eras, from the rise of Constantinople to the end of the Ottoman occupation. In offering canonical poets such as Sappho and Pindar, and the modern Nobel laureates Seferis and Elytis, the renowned editors give us their new translations and bring together other masterful translators, including Robert Fagles, James Merrill, and W. S. Merwin, along with a younger generation that includes Anne Carson, Paul Muldoon, and Alicia Stallings. This is an essential companion to the Western literary tradition.

Peter Constantine is the director of the Program in Literary Translation at the University of Connecticut, the publisher of World Poetry Books, and editor-in-chief of the magazine New Poetry in Translation. A prolific translator from several modern and classical languages, Constantine was awarded the PEN Translation Prize for Six Early Stories by Thomas Mann, the National Translation Award for The Undiscovered Chekhov, the Helen and Kurt Wolff Translator’s Prize for his translation of The Bird Is a Raven by Benjamin Lebert, and the Koret Jewish Book Award and a National Jewish Book Award citation for The Complete Works of Isaac Babel.

Rachel Hadas, Board of Governors Professor of English at the Newark campus of Rutgers University, is the author of many books. Her new volume of poetry, The Ache of Appetite, is forthcoming from Copper Beech Press in Summer 2009; her most recent book of essays is Classics (2007). A member of the American Academy of Arts and Sciences, she has been awarded a Guggenheim Fellowship, an Ingram-Merrill Foundation Fellowship, an award in literature from the American Academy-Institute of Arts and Letters, and the O.B. Hardison Award.

Edmund Keeley taught English, Creative Writing, and Hellenic Studies at Princeton for forty years until his retirement as Charles Barnwell Straut Professor of English Emeritus. In addition to his seven novels and his literary and historical studies focused on Greece, he has published fifteen volumes of poetry in translation, including the collected poems of Cavafy and Seferis (in collaboration with Philip Sherrard) and selected poems of Eltyis and Ritsos. Among his awards are the Harold Morton Landon Translation Award, the Award for Literature of the American Academy of Arts and Letters, and the PEN/Ralph Manheim Medal for Translation. He was elected Corresponding Member of the Academy of Athens and Honorary Member of the Hellenic Authors Society.

Karen Van Dyck is the Kimon A. Doukas Professor of Modern Greek Literature in the Classics Department at Columbia University where she directs the Program in Hellenic Studies and teaches courses on Modern Greek and Greek Diaspora literature. Her most recent collection The Scattered Papers of Penelope: New and Selected Poems by Katerina Anghelaki-Rooke (Graywolf, 2009) received a Lannan Translation Award. Her publications include the critical study Kassandra and the Censors (1998) and numerous articles and translations. She has been awarded Fulbright, Marshall, American Council of Learned Societies and the National Endowment for the Arts fellowships.

Robert Hass is a Pulitzer Prize-winning poet. He was the Poet Laureate of the United States from 1995 to 1997. His work has been inspired by the Beat poets as well as East Asian forms of poetry such as haiku. He lives in California.
Loading...
or
Not Currently Available for Direct Purchase