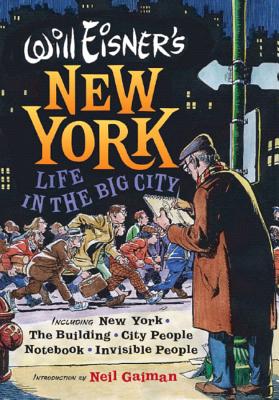 Life in the Big City

Will Eisner, Neil Gaiman (Introduction by)

With an unparalleled eye for stories and expressive illustration, Will Eisner, the master and pioneer of American comics art, presents graphic fiction's greatest celebration of the Big Apple. No illustrator evoked the melancholy duskiness of New York City as expressively as Eisner, who knew the city from the bottom up. This new hardcover presents a quartet of graphic works (New York, The Building, City People Notebook, and Invisible People) and features what Neil Gaiman describes as "tales as brutal, as uncaring as the city itself." From ancient buildings "barnacled with laughter and stained with tears" to the subways, "humorless iron reptiles, clacking stupidly on a webbing of graceful steel rails," Will Eisner's New York includes cameo appearances by the author himself; several new illustrations sketched by Eisner, posthumously inked by Peter Poplaski; and three previously unpublished "out-takes"—a treasure for any Eisner fan, and sure to become a collectible. Introduction by Neil Gaiman.

Born in New York City, Will Eisner (1917–2005) was the author of the legendary comic strip The Spirit, as well as fifteen graphic novels and three influential instructional textbooks. The comic industry’s top awards, the Eisner Awards, are named in his honor.

Neil Gaiman is the author of the New York Times best-selling A View from the Cheap Seats, The Ocean at the End of the Lane, The Graveyard Book, Coraline, Neverwhere, and the Sandman series of graphic novels, among other works. His fiction has received Newbery, Carnegie, Hugo, Nebula, World Fantasy, and Will Eisner Awards. His novel American Gods aired as a TV series in 2017. Originally from England, he lives in the United States, where he is a professor at Bard College.
Loading...
or
Not Currently Available for Direct Purchase