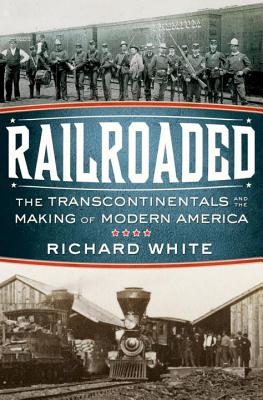 The Transcontinentals and the Making of Modern America

A new, incisive history of the transcontinental railroads and how they transformed America in the decades after the Civil War.

The transcontinental railroads of the late nineteenth century were the first corporate behemoths. Their attempts to generate profits from proliferating debt sparked devastating panics in the U.S. economy. Their dependence on public largess drew them into the corridors of power, initiating new forms of corruption. Their operations rearranged space and time, and remade the landscape of the West. As wheel and rail, car and coal, they opened new worlds of work and ways of life. Their discriminatory rates sparked broad opposition and a new antimonopoly politics.

With characteristic originality, range, and authority, Richard White shows the transcontinentals to be pivotal actors in the making of modern America. But the triumphal myths of the golden spike, robber barons larger than life, and an innovative capitalism all die here. Instead we have a new vision of the Gilded Age, often darkly funny, that shows history to be rooted in failure as well as success.


Praise For Railroaded: The Transcontinentals and the Making of Modern America…

There is not a historian in America with a steadier gaze than Richard White’s: with him, no assumption goes unchallenged, no wisdom is ever merely received. Railroaded is a wonderful book: fresh, provocative, witty, filled with foreshadowing of our world but always true to its time, and told with the narrative force of a locomotive roaring across the empty plains.

When it comes to the American West, there is no other writer like Richard White, a serious scholar with a highly original take on familiar subjects and wit and elegant prose besides. His subject, the making of the transcontinental railroads, is perhaps the pivotal story of the American West, but it’s not the one most of us know from movies and mythologies. It's about the birth of all those things that most trouble us nowadays, a genesis story in which the serpent in Eden is the railroad itself writhing across the continent. A story of corporate power, industrialization, and political corruption, White tells it as it needs to be told.
— Rebecca Solnit, author of River of Shadows: Eadweard Muybridge and the Technological Wild West

Richard White is one of those rare historians with an unfailing ability to transform any topic he writes about, no matter how familiar that topic might seem. In Railroaded, he tells the story of the western transcontinentals as it has never been told before, with insights that speak as much to our own time as to the nineteenth-century era he explores with such wit and intelligence.

Combining a robust wit with a dedication to endless labor in archives, Richard White delivers a sharp-edged new understanding of industrialization in the Gilded Age. Railroaded offers flabbergasting views of the human talent for self-justification and contradiction, provides a valuable—if unsettling—comparison to the financial troubles of our times, and shows why the best historians are compared to detectives. To readers intimidated by the topic of railroad finance: master your fears and stay on board for a very wild ride.

— Patricia Limerick, Center of the American West, University of Colorado

This brilliant book will forever change our understanding of the great railroad projects of nineteenth century America. Stripping away easy assumptions of technological triumph and financial wizardry, Railroaded tells a richer and darker story of post-Civil War America. Smashingly researched, cleverly written, and shrewdly argued all the way through, this is a powerful, smart, even angry book about politics, greed, corruption, money, and corporate arrogance, and the America formed out of them after the Civil War.

— William Deverell, Director, Huntington-USC Institute on California and the West

This is history as dark comedy, brilliant and unsettling, puncturing facile economics and bland history alike. With ingenious research and iconoclastic perspective, Richard White recasts our understanding of a major chapter in American history. Mark Twain would be bitterly amused to learn just how gilded the Gilded Age really was.
— Edward L. Ayers, President, University of Richmond

Railroaded is a leviathan, a provocative challenge to a major myth about the American West: that transcontinentals were a triumph of American entrepreneurship and ingenuity, and a godsend to those who invested in, worked on, rode, lived near, or encountered them. Far from it, Richard West argues in a strongly written narrative that barrels along the track as it draws on intimate vignettes of players great and small, these railroads often proved to be a disaster for all but the handful that dreamed them up and, abetted by cronyism and complacent governmental regulation, enriched themselves as they impoverished the rest. This tale of havoc is an unsettling allegory of today's financial collapse and essential reading for all unnerved by the thought that we seem doomed to repeat history whether we are aware of it or not.

Richard White is the Margaret Byrne Professor Emeritus of American History at Stanford University. He is the author of many acclaimed books in American western and environmental history, including Railroaded: The Transcontinentals and the Making of Modern America, winner of the Los Angeles Times Book Prize, the Parkman Prize, and a finalist for the Pulitzer Prize.
Loading...
or
Not Currently Available for Direct Purchase