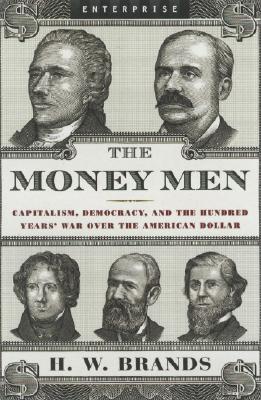 Capitalism, Democracy, and the Hundred Years' War Over the American Dollar

A best-selling historian's gripping account of the powerful men who controlled America's financial destiny.
From the first days of the United States, a battle raged over money. On one side were the democrats, who wanted cheap money and feared the concentration of financial interests in the hands of a few. On the other were the capitalists who sought the soundness of a national bank--and the profits that came with it.
In telling this exciting story, H. W. Brands focuses on five "Money Men": Alexander Hamilton, who championed a national bank; Nicholas Biddle, whose run-in with Andrew Jackson led to the bank's demise; Jay Cooke, who financed the Union in the Civil War; Jay Gould, who tried to corner the gold market; and J. P. Morgan, whose position was so commanding that he bailed out the U.S. Treasury.
"The Money Men" is a riveting narrative, a revealing history of the men who fought over the lifeblood of American commerce and power.