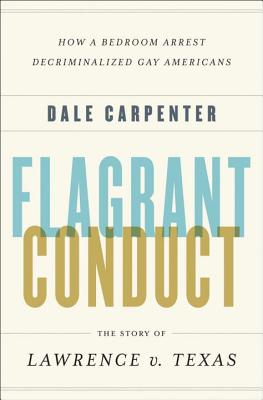 The Story of Lawrence v. Texas

"A real-life detective story that reveals the drama behind the scenes of a great Supreme Court victory for human rights." —Linda Greenhouse

No one could have predicted that the night of September 17, 1998, would be anything but routine in Houston, Texas. Even the call to police that a black man was "going crazy with a gun" was hardly unusual in this urban setting. Nobody could have imagined that the arrest of two men for a minor criminal offense would reverberate in American constitutional law, exposing a deep malignity in our judicial system and challenging the traditional conception of what makes a family. Indeed, when Harris County sheriff’s deputies entered the second-floor apartment, there was no gun. Instead, they reported that they had walked in on John Lawrence and Tyron Garner having sex in Lawrence’s bedroom.

So begins Dale Carpenter’s "gripping and brilliantly researched" Flagrant Conduct, a work nine years in the making that transforms our understanding of what we thought we knew about Lawrence v. Texas, the landmark Supreme Court decision of 2003 that invalidated America’s sodomy laws. Drawing on dozens of interviews, Carpenter has taken on the "gargantuan" task of extracting the truth about the case, analyzing the claims of virtually every person involved.

Carpenter first introduces us to the interracial defendants themselves, who were hardly prepared "for the strike of lightning" that would upend their lives, and then to the Harris County arresting officers, including a sheriff’s deputy who claimed he had "looked eye to eye" in the faces of the men as they allegedly fornicated. Carpenter skillfully navigates Houston’s complex gay world of the late 1990s, where a group of activists and court officers, some of them closeted themselves, refused to bury what initially seemed to be a minor arrest.

The author charts not only the careful legal strategy that Lambda Legal attorneys adopted to make the case compatible to a conservative Supreme Court but also the miscalculations of the Houston prosecutors who assumed that the nation’s extant sodomy laws would be upheld. Masterfully reenacting the arguments that riveted spectators and Justices alike in 2003, Flagrant Conduct then reaches a point where legal history becomes literature, animating a Supreme Court decision as few writers have done.

In situating Lawrence v. Texas within the larger framework of America’s four-century persecution of gay men and lesbians, Flagrant Conduct compellingly demonstrates that gay history is an integral part of our national civil rights story.


Praise For Flagrant Conduct: The Story of Lawrence v. Texas…

Flagrant Conduct is a stirring and richly detailed account of Lawrence v. Texas, the momentous 2003 decision that overturned Bowers [v. Hardwick].  Carpenter...tells the story through the eyes of the major players — the plaintiffs, arresting officers, attorneys, judges and prosecutors — most of whom were interviewed at length. The result is a book that turns conventional wisdom about Lawrence on its head. Indeed, the readers most likely to be surprised by Flagrant Conduct are those who think they already know the basic outlines of the case.

[An] important new book... [A] chronicle that peels the Lawrence case back through layers of carefully choreographed litigation and tactical appeals, back to the human protagonists we never really got to know, and back again through centuries of laws criminalizing “unnatural” sexual activity.
— Dahlia Lithwick - New Yorker

Starred review. In compelling and eminently readable prose—as gripping as any detective novel—Carpenter reveals the details behind the famous legal battle. ...It is a story, according to the author, that involves the misuse of authority, the cowardice of elected state-court judges who rebuffed the defendants’ legal claims, and the refusal of legislators to repeal a dubious and odious law. An important book about a landmark case.
— June Sawyers - Booklist

Dale Carpenter’s excellent new book, Flagrant Conduct: The Story of Lawrence v. Texas is not only an in-depth study of the complicated background of the case, but also a highly informative, detailed, even thrilling account of how the Supreme Court arguments reshaped American law, possibly even inadvertently leading to the legalization of same-sex marriage.

...Carpenter moves into John Grisham territory as a group of rebels with a very good cause...mount their battle against not only the Texas law but all existing state sodomy laws. Carpenter’s tale of the arrest — and how it affected these men’s lives— is fascinating, but his recounting of the Supreme Court hearings is a fine piece of dramatic reporting that sharpens the drama and presents the legal issues and personalities with clarity.

[An] informative, highly readable account of a case that has been likened in significance to Brown v. Board of Education and Gideon v. Wainwright.
— Kirkus Reviews

Dale Carpenter’s Flagrant Conduct: The Story of Lawrence v. Texas presents a micro-history of a Texas case that against all odds reached the Untied States Supreme Court and resulted in the constitutional abolition of anti-sodomy laws…. Living constitutionalists will look to evolving societal norms and the compulsion of precedent, including Lawrence v. Texas, to argue that the time has come to recognize a constitutional right to marry whom you will.

Flagrant Conduct provides a rich, meticulous, and fascinating account of the most important constitutional decision so far on the status of gays and lesbians in American society.

Easily the best book of its kind since Richard Kluger’s Simple Justice was published in 1975, Flagrant Conduct is a rare combination of virtues. It is a gripping story of individuals fighting against systematic injustices intended for a general audience, but it is also a theoretically sophisticated work that represents an important contribution to legal scholarship.

Dale Carpenter has gifted us with a landmark book to dramatize a landmark case. Gripping and brilliantly researched, Flagrant Conduct takes us on a journey of hate and contempt, activism and dedication that finally led to the legalization of our right to love, to pursue intimate pleasures within the privacy of our homes. Everybody concerned about women’s rights, gay rights, civil rights and human rights will be informed and energized by this important splendid book.

... an exceptional book, in the tradition of Anthony Lewis’s Gideon’s Trumpet (1964), expertly guiding the reader from the moment of the arrest through the culminating oral argument in the Supreme Court. Flagrant Conduct is also a moving and deeply humane study of the law’s effect on ordinary people.

In his sinuous, elegant new book, Flagrant Conduct, Dale Carpenter... gives this landmark case the bold, intimate face it has long deserved, even as he conducts a captivating, forensic tour of its legal subterrain. The result, from its first pages, is a book that sets a benchmark for the writing of civil-rights history, a book with all the stirring social consciousness and staying power of Taylor Branch’s trilogy, America in the King Years.

Superb and memorable…. Dale Carpenter’s assiduous unearthing of the case’s early history…highlights how every great constitutional decision owes its existence to obscure individuals whose crucial contributions proved more essential to the final outcome than anything in the legal briefs or oral arguments.
— David J. Grarrow - New Republic

Dale Carpenter is the Earl R. Larson Professor of Civil Rights and Civil Liberties Law at the University of Minnesota Law School. He lives in Minneapolis.
Loading...
or
Not Currently Available for Direct Purchase