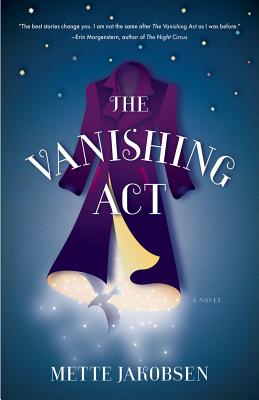 “Minou is a 12-year-old girl who lives on a tiny, snow-covered island with her philosopher father, Boxman the magician, a dog called No-Name, and Priest. When a dead boy washes up on the island, Minou makes a connection between the boy's arrival and her mother's disappearance a year earlier. Using philosophy along with the power of her imagination, Minou tries to uncover the truth behind her mother's absence. What she discovers is haunting and unforgettable. The Vanishing Act is a charming, fable-like story, beautifully told, and filled with magic!”
— Valerie Arroyo, Brewster Book Store, Brewster, MA
View the List

"The best stories change you. I am not the same after The Vanishing Act as I was before.”—Erin Morgenstern, author of The Night Circus

On a small snow-covered island—so tiny that it can’t be found on any map—lives twelve-year-old Minou, her philosopher Papa (a descendent of Descartes), Boxman the magician, and a clever dog called No-Name. A year earlier Minou’s mother left the house wearing her best shoes and carrying a large black umbrella. She never returned.

One morning Minou finds a dead boy washed up on the beach. Her father decides to lay him in the room that once belonged to her mother. Can her mother’s disappearance be explained by the boy? Will Boxman be able to help find her? Minou, unwilling to accept her mother’s death, attempts to find the truth through Descartes’ philosophy. Over the course of her investigation Minou will discover the truth about loss and love, a truth that The Vanishing Act conveys in a voice that is uniquely enchanting.

Mette Jakobsen was born in Denmark in 1964. She holds degrees in philosophy and creative writing and is the author of several plays. The Vanishing Act is her first novel. She lives in Sydney, Australia.

Each of the characters has a personal philosophy that colors how they view what happens in their lives. How do those philosophies explain who each of them is?

Why does the author choose