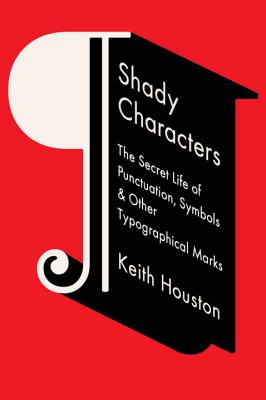 The Secret Life of Punctuation, Symbols, and Other Typographical Marks

From ancient Greece to the Internet—via the Renaissance, Gutenberg, and Madison Avenue—Shady Characters exposes the secret history of punctuation.

A charming and indispensable tour of two thousand years of the written word, Shady Characters weaves a fascinating trail across the parallel histories of language and typography.


Whether investigating the asterisk (*) and dagger (†)—which alternately illuminated and skewered heretical verses of the early Bible—or the at sign (@), which languished in obscurity for centuries until rescued by the Internet, Keith Houston draws on myriad sources to chart the life and times of these enigmatic squiggles, both exotic (¶) and everyday (&).

From the Library of Alexandria to the halls of Bell Labs, figures as diverse as Charlemagne, Vladimir Nabokov, and George W. Bush cross paths with marks as obscure as the interrobang (?) and as divisive as the dash (—). Ancient Roman graffiti, Venetian trading shorthand, Cold War double agents, and Madison Avenue round out an ever more diverse set of episodes, characters, and artifacts.

Richly illustrated, ranging across time, typographies, and countries, Shady Characters will delight and entertain all who cherish the unpredictable and surprising in the writing life.

Praise For Shady Characters: The Secret Life of Punctuation, Symbols, and Other Typographical Marks…

I'm a sucker for this stuff. The @ is called a chiocciola (snail) in Italian! The & was once taught as a letter of the alphabet! The manicule has been with us for a millenium! Thank you,  Keith Houston, for bringing these little mysteries out of the shadows of typographic history.

For fans of Lynn Truss’s Eats, Shoots & Leaves, this bestiary of lesser-known punctuation marks is a wonder.

A mostly amusing, informative history of punctuation… Houston explores the roles a variety of punctuation marks have played in the popular imagination. The forgotten manicule, the modest dash and the ampersand all make appearances, as do intriguing characters from millennia past. The book is often engrossing… An unusual triumph of the human ability to find exaltation in the mundane.
— Kirkus Reviews

This book has more in common with Malcolm Gladwell than with standard history writing.
— Library Journal

If Eats, Shoots & Leaves whetted your appetite on the subject of punctuation, then you have a treat in store. Shady Characters is an authoritative, witty, and fascinating tour of the history and rationale behind such lesser known marks as the ampersand, manicule, the pilcrow, and the interrobang. Keith Houston also explains the octothorpe—otherwise known as the hashtag—and and my final comment on his book is #awesome.

— Ben Yagoda, author of How to Not Write Bad

Make no mistake: this is a book of secrets. With zeal and rigor, Keith Houston cracks open the &, the #, the † and more—all the little matryoshka dolls of meaning that make writing work. Inside, we meet novelists, publishers, scholars and scribes; we range from ancient Greeks to hashtagged tweets; and we see the weird and wonderful foundations of the most successful technology of all time.
— Robin Sloan, author of Mr. Penumbra's 24-Hour Bookstore

Might make you look at books… in an entirely new way.
— Andrew Robinson - Nature

A pleasurable contribution to type history, particularly for readers who haven’t considered the ampersand in any detail.
— Carl W. Scarbrough - New Criterion

Keith Houston is the author of Shady Characters and The Book. His writing has appeared in the New York Times, the Wall Street Journal, the Financial Times, Mental Floss, BBC Culture, and on Time.com. He lives in Birmingham, England.
Loading...
or
Not Currently Available for Direct Purchase