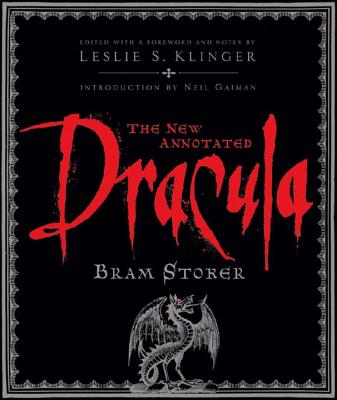 Cause for international celebration—the most important and complete edition of Dracula in decades.

In his first work since his best-selling The New Annotated Sherlock Holmes, Leslie S. Klinger returns with this spectacular, lavishly illustrated homage to Bram Stoker's Dracula. With a daring conceit, Klinger accepts Stoker's contention that the Dracula tale is based on historical fact. Traveling through two hundred years of popular culture and myth as well as graveyards and the wilds of Transylvania, Klinger's notes illuminate every aspect of this haunting narrative (including a detailed examination of the original typescript of Dracula, with its shockingly different ending, previously unavailable to scholars). Klinger investigates the many subtexts of the original narrative—from masochistic, necrophilic, homoerotic, "dentophilic," and even heterosexual implications of the story to its political, economic, feminist, psychological, and historical threads. Employing the superb literary detective skills for which he has become famous, Klinger mines this 1897 classic for nuggets that will surprise even the most die-hard Dracula fans and introduce the vampire-prince to a new generation of readers.

Praise For The New Annotated Dracula (The Annotated Books)…

Leslie S. Klinger’s great virtue as an editor is his sublimely willful and scrupulous disregard for the boundary between historical fact and literary falsehood. In The New Annotated Dracula, he reprises the same earlier annotated Sherlock Holmes, treating Stoker’s novel as nonfiction: real events happening to real persons. After a brief preface in which he explains his trick, Klinger’s edition becomes a surreal treat, book’s succession of journal entries and letters.

This is a book every serious reader of the horror genre should have on his or her shelf. You will read Dracula with new eyes. Fascinating!

Bram Stoker (1847-1912), an Irish novelist and short story writer, was known during his lifetime as the personal assistant of actor Henry Irving and business manager of the Lyceum Theatre in London, which Irving owned, but is best known today for his 1897 Gothic novel Dracula.

Neil Gaiman is the author of the New York Times best-selling A View from the Cheap Seats, The Ocean at the End of the Lane, The Graveyard Book, Coraline, Neverwhere, and the Sandman series of graphic novels, among other works. His fiction has received Newbery, Carnegie, Hugo, Nebula, World Fantasy, and Will Eisner Awards. His novel American Gods aired as a TV series in 2017. Originally from England, he lives in the United States, where he is a professor at Bard College.
Loading...
or support indie stores by buying on