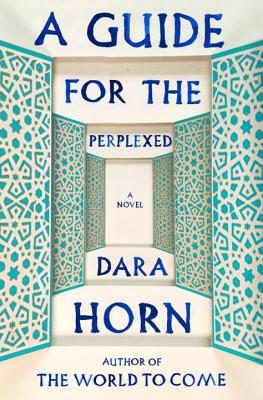 A Guide for the Perplexed

The incomparable Dara Horn returns with a spellbinding novel of how technology changes memory and how memory shapes the soul.

Software prodigy Josie Ashkenazi has invented an application that records everything its users do. When an Egyptian library invites her to visit as a consultant, her jealous sister Judith persuades her to go. But in Egypt’s postrevolutionary chaos, Josie is abducted—leaving Judith free to take over Josie’s life at home, including her husband and daughter, while Josie’s talent for preserving memories becomes a surprising test of her empathy and her only means of escape.


A century earlier, another traveler arrives in Egypt: Solomon Schechter, a Cambridge professor hunting for a medieval archive hidden in a Cairo synagogue. Both he and Josie are haunted by the work of the medieval philosopher Moses Maimonides, a doctor and rationalist who sought to reconcile faith and science, destiny and free will. But what Schechter finds, as he tracks down the remnants of a thousand-year-old community’s once-vibrant life, will reveal the power and perils of what Josie’s ingenious work brings into being: a world where nothing is ever forgotten.

An engrossing adventure that intertwines stories from Genesis, medieval philosophy, and the digital frontier, A Guide for the Perplexed is a novel of profound inner meaning and astonishing imagination.

Praise For A Guide for the Perplexed: A Novel…

Readers will be taken in by this literary thriller’s fast-paced plot and complicated but well-imaged characters. A sure bet.
— Library Journal

It’s not every day you come across a genuinely page-turning kidnapping story that is also replete with historical, psychological, and interpretive insights into Maimonides, envy, and motherhood, not to mention replicating the narrative structure and central themes of the biblical story of Joseph. A Guide for the Perplexed is Dara Horn’s most ambitious, audacious, edifying, and entertaining novel yet.

— Elif Batuman, author of The Possessed: Adventures with Russian Books and the People Who Read Them

[A Guide for the Perplexed] is so beautiful, so mystical, so exciting… I really urge you to read Dara Horn.

Horn moves seamlessly back and forth in time.
— Entertainment Weekly

Intricate and suspenseful, A Guide for the Perplexed is both learned and heartfelt, an exploration of human memory, its uses and misuses, that spans centuries in a twisty braid full of jaw dropping revelations and breathtaking reversals. An elegant and brainy page-turner from a master storyteller.

[Within A Guide for the Perplexed] beats the living heart of a very human drama, one that will have readers both caught up in the suspense and moved by the tragic dimensions of the unresolved dilemma at the core of the story.

Horn is embracing her own, livelier brand of Jewish history, embodied in the joys of discovering-and creating-the past anew.
— Tablet Magazine

Wondrous…a richly layered novel…. Horn has magically summoned the wisdom of the ages to address a most contemporary dilemma…riveting and suspenseful…. A novelist at the height of her powers.
— Andrew Ferman - Miami Herald

A Guide for the Perplexed is a richly layered book that leaves a reader…grateful and impressed.

Dara Horn is the author of five novels and one of Granta’s Best Young American Novelists. She has taught Jewish literature at Harvard, Sarah Lawrence College, and Yeshiva University. She lives in New Jersey with her husband and four children.

Josie’s Genizah software categorizes memories by themes like “entertainment” and “travel” and carefully curates what it records to bury the unpleasant and the ugly. Do our minds work this way? Would you subscribe to Genizah? How has other technology already changed how you experience things and remember them?

What is the significance of dreams in the novel? Does it make sense to catalog them in Genizah along with daytime memories, as Nasreen wants to do? Do you think they are “mental garbage” or “a window to a world beyond what a waking person could perceive”?

Maimonides tried to reconcile faith and reason in his writings. What role do religion, rational thought, and intelligence play in how the characters see themselves and others?

Josie designed her software to record patterns in human behavior, which she thinks can be used to predict future outcomes. Maimonides believed that, as the ancient rabbis expressed it, “Everything is foreseen, but freedom of choice is granted.” Are their beliefs compatible? Do you believe that you are in control of the choices you make?

When Josie is putting together a Genizah of Tali from memory, she realizes that the Tali who emerges is very different from the one captured by the software at home. What does this suggest about Josie’s feelings toward her daughter? How does their relationship differ from Tali’s relationship with Judith?

One of Cairo’s unique features is its vast necropolis full of living squatters, but Nasreen says, “All cities are really cities of the dead.” Do you agree with her? Do you live in a place where you can feel the generations that came before you?

How do Josie and Judith and their relationship change over the course of the novel? Which of the sisters do you most sympathize with?

Schechter says, “Every human being, in the end, becomes the opposite of an archive.” He also describes himself as a palimpsest—a piece of parchment on which one text has been inscribed over another. What does he mean by using these metaphors, and how do they apply to himself and others? Do they also apply to the novel itself?

The book is full of encounters between people of different backgrounds: Judith and Itamar, Schechter and the Scottish twins, Mosheh and the vizier, and Josie and Nasreen, to name a few. How do these people view each other? What cultural differences and worldviews come to light in their conversations?

There are four pairs of siblings in the novel: Judith and Josie, Schechter and Srulik, Margaret and Agnes, Mosheh and David. How does the novel explore themes of jealousy, ambition, success, and love through the siblings? Did their relationships remind you of your relationship with your siblings?

In what ways does the novel’s narrative parallel the biblical story of Joseph? Do you think this correspondence enhances the power of the novel? In general, are biblical stories relevant to the present or to understanding the challenges of modern life?

Did Judith deserve Josie’s forgiveness in the end? Did Josie deserve Judith’s? Did the final chapter about Tali change the way you felt about the outcome of the story?

Like historians piecing together the past, several characters wish to bring the dead back “to life” through bits of memory, writings, photographs, and recordings. Is this possible? How have you dealt with the death of someone you loved and the artifacts—such as letters and photographs—that were left behind?

How do the three stories—of Josie and Judith Ashkenazi, Solomon Schechter, and Mosheh ben Maimon—intersect and relate to one another? How does Maimonides’s Guide for the Perplexed echo through all the layers of the novel?