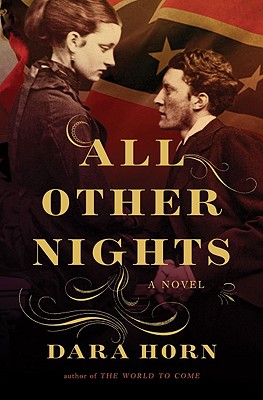 “All Other Nights is a picture of the Civil War I've never seen before -- Jew divided from Jew, just like the rest of the country. Eccentric and highly memorable characters, tragedy, deep romance, and an intricate plot make this a thrilling read that I will be recommending to a broad swath of customers.”
— Lilla G. Weinberger, Readers' Books, Sonoma, CA
View the List

“The Civil War divided America's Jewish population geographically, but they remained united by business, family relationships, and religion. The moral divide over slavery casts a Union soldier of Jewish descent into acts of espionage that involve both family and friends. How this night is different from every other night is a profound question that Jews ask themselves during Passover. What happens to this soldier on various nights of his deployment wrecks havoc with his identity and his allegiances. Horn paces this novel like a thriller. I couldn't put it down!”
— Dianne Patrick, Snowbound Books, Marquette, MI
View the List

A gripping epic about the great moral struggles of the Civil War.

How is tonight different from all other nights? For Jacob Rappaport, a Jewish soldier in the Union army, it is a question his commanders have answered for him: on Passover in 1862 he is ordered to murder his own uncle, who is plotting to assassinate President Lincoln.After that night, will Jacob ever speak for himself? The answer comes when his commanders send him on another mission—this time not to murder a spy but to marry one.A page-turner rich with romance and the history of America (North and South), this is a book only Dara Horn could have written. Full of insight and surprise, layered with meaning, it is a brilliant parable of the moral divide that still haunts us: between those who value family first and those dedicated, at any cost, to social and racial justice for all.


Praise For All Other Nights: A Novel…

A stunning historical novel that will challenge readers' preconceptions.

Horn propels the story at a thriller's pace; the mix of love and loyalty played out in a divided America is sublime.

For a writer as young as Horn to be compared with Conrad shows what kind of league she's playing in.

Stellar. . . . the propulsive, suspenseful narrative of an espionage thriller, [and] the larger moral dilemmas Horn weaves into an epic.

Slam-bang... superb...a gripping plot premise and a fascinatingly conflicted protagonist. …a marvelous variety of characters, each imagined with empathy and depth.

A tale of adventure...betrayal and love, dignity and loss, that takes the breath away and makes the heart pound.
— Anne Roiphe

Dara Horn is a two-time winner of the National Jewish Book Award for Fiction and one of Granta’s Best American Novelists. She lives in New Jersey with her husband and four children.
Loading...
or
Not Currently Available for Direct Purchase