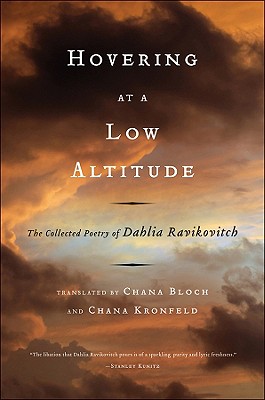 Hovering at a Low Altitude (Hardcover)

The Collected Poetry of Dahlia Ravikovitch

"[Ravikovitch’s] song is both ancient and new, and it is unutterably poignant." —Stanley Kunitz

In poems about fathers and daughters, men and women, kings and their subjects, the precarious position of women and the plight of Palestinians under the Occupation, Dahlia Ravikovitch articulates the painful asymmetries of power. The extraordinary stylistic range of her poetry reveals her mastery of the verbal art.

I was a clockwork doll, but then

That night I turned round and around

And fell on my face, cracked on the ground,

And they tried to piece me together again.

Then once more I was a proper doll

And all my manner was nice and polite.

But I became damaged goods that night,

A fractured twig poised for a fall.

Dahlia Ravikovitch, who died in 2005 at age sixty-nine, was one of the most distinctive voices in contemporary Hebrew literature and the Israeli peace movement. She spent most of her life in Tel Aviv, Israel.