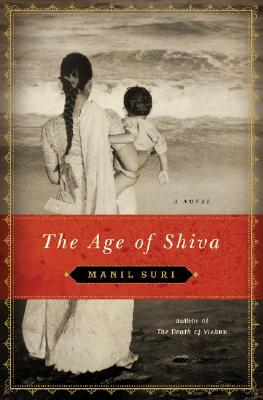 "In The Age of Shiva India's birth as a new nation parallels a woman's complex psychological journey confronting tradition and modernity. Exchanging sentimentality for clear vision, Suri reveals an immense humanity, and a tenderness for women making their way in a world of men. Drawn by this compelling narrative, I read this marvelous book in one sitting." —Kiran Desai, author of The Inheritance of Loss, recipient of the Man Booker Prize

Following his spectacular debut, The Death of Vishnu, Manil Suri returns with a mesmerizing story of modern India, richly layered with themes from Hindu mythology. The Age of Shiva is at once a powerful story of a country in turmoil and an extraordinary portrait of maternal love. Meera, the narrator, is seventeen years old when she catches her first glimpse of Dev, performing a song so infused with passion that it arouses in her the first flush of erotic longing. She wonders if she can steal him away from Roopa, her older, more beautiful sister, who has brought her along to see him. When Meera’s reverie comes true, it does not lead to the fairy-tale marriage she imagined. She escapes her overbearing father only to find herself thrust into the male-dominated landscape of India after independence. Dev’s family is orthodox and domineering, his physical demands oppressive. His brother Arya lusts after her with the same intensity that fuels his right-wing politics. Although Meera develops an unexpected affinity with her sister-in-law Sandhya, the tenderness they share is as heartbreaking as it is fleeting. It is only when her son is born that Meera begins to imagine a life of fulfillment. She engulfs him with a love so deep, so overpowering, that she must fear its consequences. Meera's unforgettable story, embodying Shiva as a symbol of religious upheaval, places The Age of Shiva among the most compelling novels to emerge from contemporary India.

Manil Suri is the best-selling author of The Death of Vishnu, a finalist for the PEN/Faulkner Award, The Age of Shiva, and The City of Devi. A native of Mumbai, he is a professor of mathematics at the University of Maryland, Baltimore County.
Loading...
or
Not Currently Available for Direct Purchase