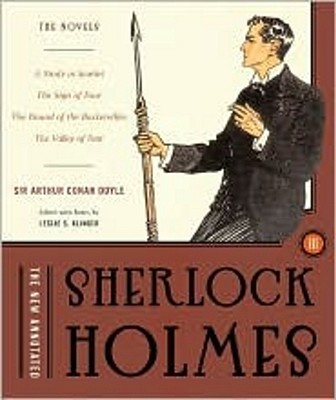 The Novels (The Annotated Books)

The publication of Leslie S. Klinger's brilliant new annotations of Sir Arthur Conan Doyle's four classic Holmes novels in 2005 created a Holmes sensation. Available again in an attractively-priced edition identical to the first, except this edition has no outer slipcase.

Klinger reassembles Doyle's four seminal novels in their original order, with over 1,000 notes, 350 illustrations and period photographs, and tantalizing new Sherlockian theories. Inside, readers will find:


Whether as a stand-alone volume or as a companion to the short stories, this classic work illuminates the timeless genius of Conan Doyle for an entirely new generation.


Praise For The New Annotated Sherlock Holmes: The Novels (The Annotated Books)…

A must-have for any serious mystery fan, this edition will stand as the benchmark for generations to come.
— Publishers Weekly

A vast work of entertaining ingenuity and erudition.
— Boston Globe

Even the sleuth of Baker Street would be awed by the ingenious deductions and dazzling speculations of modern Sherlockian scholarship.
— Michael Dirda

Hailed as the definitive exegesis of Holmes and his times.
— Mark Weingarten - The New York Times

A feast for any fans of the greatest detective who ever stalked the earth.
— Maureen Corrigan - Fresh Air

Sir Arthur Conan Doyle (1859-1930) is most noted for his Sherlock Holmes detective stories. He was a prolific writer whose other works include a wide range of science fiction stories, historical novels, romances, poetry, and nonfiction.