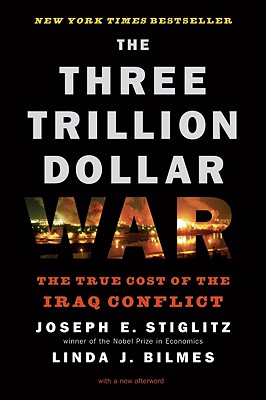 The True Cost of the Iraq Conflict

The true cost of the Iraq War is $3 trillion—and counting—rather than the $50 billion projected by the White House.

Apart from its tragic human toll, the Iraq War will be staggeringly expensive in financial terms. This sobering study by Nobel Prize winner Joseph E. Stiglitz and Harvard professor Linda J. Bilmes casts a spotlight on expense items that have been hidden from the U.S. taxpayer, including not only big-ticket items like replacing military equipment (being used up at six times the peacetime rate) but also the cost of caring for thousands of wounded veterans—for the rest of their lives. Shifting to a global focus, the authors investigate the cost in lives and economic damage within Iraq and the region. Finally, with the chilling precision of an actuary, the authors measure what the U.S. taxpayer's money would have produced if instead it had been invested in the further growth of the U.S. economy. Written in language as simple as the details are disturbing, this book will forever change the way we think about the war.

Linda J. Bilmes, of Harvard University's Kennedy School of Government, is an expert in government finance. She is a former assistant secretary and chief financial officer of the U.S. Department of Commerce.

Joseph E. Stiglitz is a Nobel Prize–winning economist and the best-selling author of Globalization and Its Discontents Revisited: Anti- Globalization in the Age of Trump, The Price of Inequality, and Freefall. He was chairman of the Council of Economic Advisers under President Clinton, chief economist of the World Bank, named by Time as one of the 100 most influential individuals in the world, and now teaches at Columbia University and is chief economist of the Roosevelt Institute.
Loading...
or
Not Currently Available for Direct Purchase