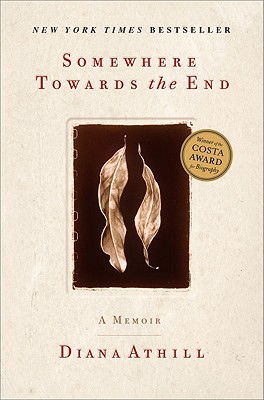 Somewhere Towards the End

Winner of the 2009 National Book Critics Circle Award in Autobiography and a New York Times bestseller: a prize-winning, critically acclaimed memoir on life and aging —“An honest joy to read” (Alice Munro).

Diana Athill is one of the great editors in British publishing. For more than five decades she edited the likes of V. S. Naipaul and Jean Rhys, for whom she was a confidante and caretaker. As a writer, Diana Athill has made her reputation for the frankness and precisely expressed wisdom of her memoirs. Now in her ninety-first year, "entirely untamed about both old and new conventions" (Literary Review) and freed from any of the inhibitions that even she may have once had, Athill reflects candidly, and sometimes with great humor, on the condition of being old—the losses and occasionally the gains that age brings, the wisdom and fortitude required to face death. Distinguished by "remarkable intelligence...[and the] easy elegance of her prose" (Daily Telegraph), this short, well-crafted book, hailed as "a virtuoso exercise" (Sunday Telegraph) presents an inspiring work for those hoping to flourish in their later years.

Praise For Somewhere Towards the End: A Memoir…

[A] little literary gem, penned by a marvelous, feisty old character whom, quite honestly, I’d just love to have as my grandmother…What a treasure.
— Val Hennessy - Daily Mail

Reflections on old age, rather than on a long life lived are rare…It is rarer still for a woman to write such a book: so Athill’s candor and economic prose on religion, regrets, and sex are invigorating.
— Emma Jacobs - Financial Times

One of England’s notable book editors examines life, old age and approaching death with astonishing candor...distinguished by her spare, direct prose...Although she knows that death cannot be far off, the present is full of quiet satisfactions...Fiercely intelligent, discomfortingly honest and never dull.
— Kirkus Reviews

[Athill] is bluntly unconcerned with conventional wisdom... . Firmly resolute that no afterlife awaits her, Athill finds just enough optimism in this world to keep her reflections from slipping into morbidity—she may not offer much comfort, but it's a bracing read.
— Publishers Weekly

An astute editor, she writes with precision and clarity, using one word to convey an idea that a lesser writer might expand into a paragraph….[Athill is] an enlightened woman.
— Mary Russell - The Irish Times

With the wisdom of nine decades, Diana Athill gives us a memoir that faces aging unflinchingly. From the end of sexual desire to her thoughts and fears on dying and God, Athill deals with growing old with bravery, humor and honesty. What a woman! What a life! What a gorgeous book!
— Ann Hood, author of Comfort and The Knitting Circle

After a distinguished career as a book editor, Diana Athill (1917—2019) won the National Book Critics Circle and Costa Biography Awards for her New York Times best-selling memoir Somewhere Towards the End. In January 2009, she was presented with an Order of the British Empire.
Loading...
or
Not Currently Available for Direct Purchase