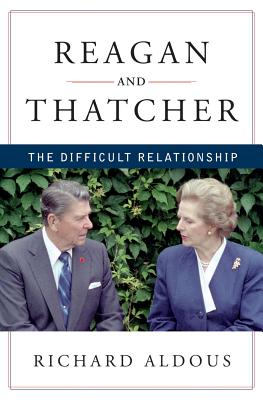 An iconic friendship, an uneasy alliance—a revisionist account of the couple who ended the Cold War.

For decades historians have perpetuated the myth of a "Churchillian" relationship between Ronald Reagan and Margaret Thatcher, citing their longtime alliance as an example of the "special" bond between the United States and Britain. But, as Richard Aldous argues in this penetrating dual biography, Reagan and Thatcher clashed repeatedly—over the Falklands war, Grenada, and the SDI and nuclear weapons—while carefully cultivating a harmonious image for the public and the press. With the stakes enormously high, these political titans struggled to work together to confront the greatest threat of their time: the USSR.

Brilliantly reconstructing some of their most dramatic encounters, Aldous draws on recently declassified documents and extensive oral history to dismantle the popular conception of Reagan-Thatcher diplomacy. His startling conclusion—that the weakest link in the Atlantic Alliance of the 1980s was the association between the two principal actors—will mark an important contribution to our understanding of the twentieth century.


Praise For Reagan and Thatcher: The Difficult Relationship…

Starred review. This is excellent revisionist history, giving another slant to the interaction of two political icons on the world stage.
— Publishers Weekly

An important study, based on a wealth of recently-released documents, which puts the Thatcher-Reagan friendship in a wholy new (and more somber) light. It should be essential reading for anyone who cares about the history, the health and the future of the Anglo-American 'special relationship'.
— David Cannadine, author of The Decline and Fall of the British Aristocracy and Mellon: An American Life

I can’t speak for President Reagan, but I’ve been both praised and pulverized by Margaret Thatcher and Richard Aldous seems to me to have captured the force of her personality. She did have an emotional understanding of Reagan and her of her that in its essence, in my judgement, was warmer than between Churchill and Roosevelt. But her fury was incandescent over the invasion of Grenada, a member of the Commonwealth, as was the wimpiness of the initial American reaction to the seizure of the Falkland Islands. This is a valuable look behind the looking glass of public-relations politics of the special relationship.
— Harold Evans, author of The American Century

Richard Aldous is a professor of history at Bard College, where he holds the Eugene Meyer Chair. He is the author and editor of eleven books and is a contributor to television and radio on both sides of the Atlantic. Aldous’s writing appears regularly in the Wall Street Journal, the New York Times Book Review, and The American Interest, where he is a contributing editor. He lives in Red Hook, New York.
Loading...
or
Not Currently Available for Direct Purchase