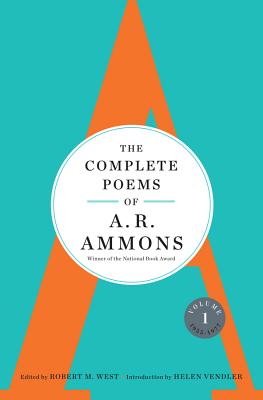 The Complete Poems of A. R. Ammons

“One of the great American poets . . . he sounds like nobody else.”—Helen Vendler

“So I said I am Ezra / and the wind whipped my throat / gaming for the sounds of my voice. . . .” So begins one of the most remarkable oeuvres in the history of American poetry. The Complete Poems of A. R. Ammons, Volume I presents the first half of Archie Randolph Ammons’s long career, including the complete texts of his three book-length poems from that period: the verse diary Tape for the Turn of the Year, the Bollingen Prize–winning Sphere: The Form of a Motion, and the daring kaleidoscope of The Snow Poems, which late in life Ammons said of all his long poems was his favorite.

Here are many of Ammons’s most widely celebrated lyrics and meditations, including “Corsons Inlet,” “Still,” “Gravelly Run,” and “The City Limits.” Others are more directly inspired by his roots in the rural south, among them “Nelly Myers,” “Silver,” and “Mule Song.” Here too are conversations with mountains (as in “Classic” and “Mountain Talk”) and exchanges with the wind (“The Wide Land” and “Mansion”), materialist explanations of reality (“Mechanism” and “Catalyst”) and prayers (such as the several poems titled “Hymn”). A poet drawn to theorizing about poetry, Ammons offers both sophisticated discussions of the art (as in “Poetics” and “Essay on Poetics”) and disarming assurance: “I believe in fun.”

The text of each poem has been established after careful consideration of Ammons’s manuscripts and other prepublication materials. Endnotes detail the poems’ composition and publication histories, and also helpfully annotate references made within the poems. This volume confirms Richard Howard’s judgment: “Here was a great poet, surely one of the largest to speak among us.”

[M]onumental and authoritative. . . . Ammons continued the American vernacular tradition of Whitman and Williams, pushing it in unexpected directions. . . . These books are large and sprawling and unwieldy, which is probably how Ammons would've wanted it.
— Publishers Weekly, Best Books 2017

A. R. Ammons’s (1926–2001) was a two-time winner of the National Book Award and the recipient of a National Book Critics Circle Award. His many additional honors include the Academy of American Poets’ Wallace Stevens Award, the Bollingen Prize, the Poetry Society of America’s Robert Frost Medal, the Ruth Lilly Prize, and fellowships from the Guggenheim and MacArthur Foundations.

Robert M. West is a professor of poetry and contemporary literature at Mississippi State University and lives in Starkville, Mississippi.
Loading...
or support indie stores by buying on